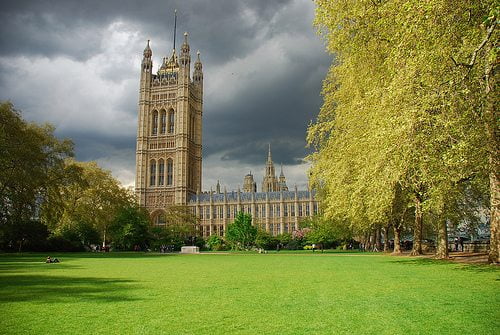 Chancellor George Osborne has delivered a budget that environmental campaigners have called “dirty business as usual”, after the announcement of policies that will support fossil fuel companies and cut the price of carbon.

In his budget speech, Osborne pledged that the government would invest in new sources of energy – namedropping nuclear, renewables and shale gas as well as mentioning energy efficiency initiatives – in an effort to cut energy costs.

However, the environment and climate change went unmentioned while the chancellor revealed a number of policies that will boost polluters.

Osborne announced a £7 billion package to cut energy bills for manufacturers, while capping the carbon price floor (CPF) at £18 per ton of CO2 from 2016-17 till the end of the decade.

The CPF is a top up tax that sets the minimum cost of energy generated from fossil fuels. It also provides a mechanism for increasing the cost, to take into account the negative impact of emissions on society and the environment.

Though the impact of the divisive tax was debated, renewable industry leaders warned that freezing it could compromise essential investment in low-carbon technology.

“By freezing the CPF, the chancellor is rowing back on his own policy and once again moving the goalposts for investors in green energy,” the chief executive of the Renewable Energy Association Dr Nina Skorupska said today.

“The government must explain in black and white how investment in renewables is protected from the freeze, or risk undermining the investment required to replace ageing coal power stations with technologies that can keep the lights on without damaging the climate,” she added.

When introducing the CPF in his 2011 budget speech, Osborne too said, “Investment in green energy will never be certain unless we bring some stability to the price of carbon.”

Energy UK, the trade body for the energy industry, also said that while it supports capping the carbon price floor, such a move “also has downsides.”

“An important one is that it worsens the economics of the essential generation of electricity from gas,” a spokesperson said.

The government estimates that the freeze will also result in a 3-4% increase in electricity consumption and £1.8 billion of lost revenue.

Separately, Osborne also announced that an already existing compensation scheme for energy intensive industries would be extended until 2020.

Also of particular concern to environmentalists is the chancellors pledge to review the tax regime for North Sea oil and gas operations to ensure the UK is “extracting every drop of oil we can.”

Such a plan seemingly contradicts the UK’s commitments to decarbonise its economy. It also ignores the warnings from scientists that the majority of known fossil fuel reserves must stay in the ground if runaway climate change is to be avoided.

Osborne also announced an air passenger duty cut for long haul flights and revealed that the planned September increase in fuel duty will not happen, providing a boost for drivers. More sustainable modes of transport received no such benefits.