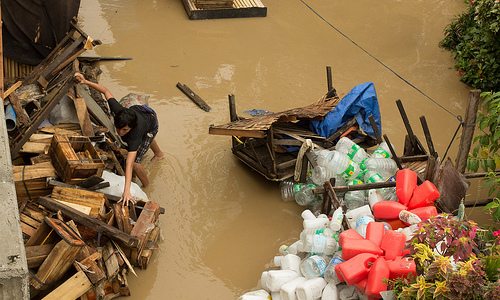 More than 60 countries – including India and China – with a total estimated output of $44 trillion, are at high risk of extreme climate events by 2025, a new study has found.

Maplecroft’s Climate Change and Environmental Risk Atlas shows that several countries, which account for the 31% of global GDP, will have to deal with more storms, flooding or drought over the next three decades.

Considering different factors such as the exposure to extreme climate events, infrastructure, adaptive capacity of populations, resource security and effectiveness of government, the index found Bangladesh to be the most threatened country, followed by Guinea-Bissau, Sierra Leone, Haiti, South Sudan, Nigeria, Congo, Cambodia, Philippines and Ethiopia.

However, the index also ranked India and China as countries at high and medium risk. The two countries’ GDP is expected to account for the 23% of global economic output by 2025.

Local populations are not the only ones in danger, according to James Allan, head of environment at Maplecroft.

“With global brands investing heavily in vulnerable growth markets to take advantage of the spending power of rising middle class populations, we are seeing increasing business exposure to extreme climate related events on multiple levels, including their operations, supply chains and consumer base”, he said.

“Cyclone Phailin demonstrates the critical need for business to monitor the changing frequency and intensity of climate related events, especially where infrastructure and logistics are weak.”

The study also analysed the world’s largest cities and found that Dhaka Mumbai, Manila, Bangkok and a number of important centres of Chinese manufacturer industry are at risk of extreme climate events, while London and Paris are classified as at “low risk”.