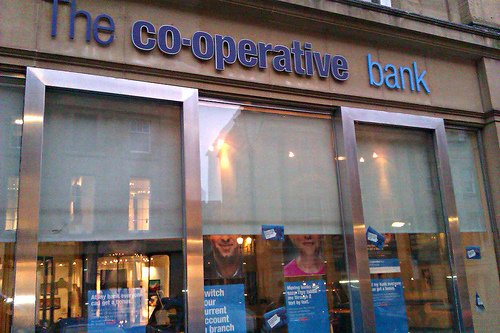 The Co-operative Bank has struck a deal to buy 632 Lloyds TSB and Cheltenham and Gloucester (C&G) branches in the UK, in what it’s calling the “biggest shake-up in high street banking in a generation”.

Unless specifically requested otherwise, some 4.8m customers will see their accounts automatically transferred to The Co-op in the deal, increasing the bank’s market share of UK current accounts seven-fold, from 1% to 7%, and bringing its total branches to almost 1,000.

The acquisition sees The Co-op pay Lloyds and C&G £350m as an initial sum, rising to £750m depending on performance, for ‘Verde’ – the working name for a new bank that Lloyds Banking Group had planned to launch late next year.

The new business’ CEO Paul Pester is currently awaiting FSA approval to be installed as chief executive of the newly acquired section of the bank.

NBNK, an investment company formed by Lord Levene and led by ex-Northern Rock chief Gary Hoffman, failed in its attempt to purchase Verde for a princely £1.5 billion in June this year, and ultimately announced its intention to wind down after this unsuccessful bid.

Lloyds had been forced to sell the branches under European Union state-aid rules, after it received a £20 billion lifeline during the 2008 credit crunch, meaning it is now 40% owned by the taxpayer.

The Co-op’s successful acquisition of Verde, for a sum much less than the one NBNK offered, was described by Lloyds Banking Group chief executive António Horta-Osório as “an important step”. He added that the deal provides “greater certainty for [its] customers and for [its] shareholders”.

Despite the crisis in the financial sector, our bank has continued to go from strength to strength – Peter Marks, The Co-operative Group

“It would be a great deal for customers because it would make the services of our member-owned, customer-led, ethically-driven, bank available to millions of people we’ve not been able to serve up until now”, he said.

“It would be a great deal for the taxpayer because as well as receiving a fair price up front, the deal would also mean they would share in the profits of the enlarged bank for years to come.

“So far as UK banking generally is concerned, this would be a great deal because it would help restore trust in a sector whose image has been badly tarnished over recent years.

“And finally, it would be a great deal for The Co-operative Group, its 20m customers, its 7m customer-owners and its 100,000 staff, because it would propel us into the premier league of UK banking.”

The UK’s high street banks have received a significant amount of pressure lately, particularly after the Libor rate-fixing scandal at Barclays and, more recently, the accusations of money laundering at HSBC.

This has led to an unprecedented increase in customers seeking out alternative options, with some of the smaller ethical banks receiving levels of interest never seen before in their existence.

Triodos Bank, for example, which provides 40,000 current accounts in the UK, witnessed a 51% surge in account applications in the week in which the Barclays scandal came to light. In one 24-hour period, the bank opened three times as many accounts compared to an average day.

Meanwhile, Charity Bank revealed it had welcomed 440 new customers between January 1 and June 30 this year – a figure 300 more than the same period in 2011.

The Co-op, as the largest ethics-driven bank in the UK, has also seen an increase of interest in recent months, as well as faring well in troubled economic times, according to its chief executive, Marks.

“Despite the crisis in the financial sector, our bank has continued to go from strength to strength, coming through the financial crisis in great shape and maintaining our ethical and socially responsible credentials”, he outlined.

“Whilst we are not at the end of the road yet, we are pleased to have reached this important milestone and look forward to continuing to work with Lloyds Banking Group to reach a final agreement.”

Blue & Green Tomorrow’s next in-depth report is about sustainable banking. We’ll be talking to a number of UKJ ethical banks and building societies to get a flavour of what it means to be a customer of an institution that actually cares.