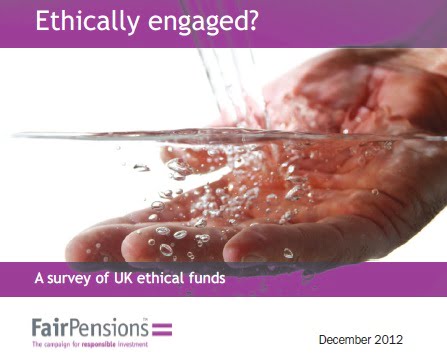 As we reported on Saturday, the responsible investment campaign group FairPensions has released a challenging report on the state of ethical funds. The critical but welcome study demands more transparency, more aligned screening and greater investor engagement on the part of ethical funds.

The FairPensions report could make uncomfortable reading for many of the 20 ethical funds it ranked, especially those languishing at the bottom of the table.

This 20 is a small sample of an admittedly small market of between 90 and 137 ‘ethical’ funds. However, any risk of being unrepresentative could cut both ways, in that these could be a better or worse than average sample. That said, the 20 are an even tinier sample of the wider sustainable fund market and the 3,000 or so funds available to investors.

The survey behind the report found that many of the ranked funds were failing to engage fully with investors (one of the key tenets of responsible investing). Some were excluding companies known colloquially as sin stocks (tobacco, alcohol, gambling, arms, pornography and nuclear energy) but including those that raise investors’ environmental and human rights concerns, such as fossil fuels and child labour respectively.

While 18 of the 20 funds report some of their company holdings, the study finds only nine report all of them.  This finding is false as all UK-domiciled funds must report all their holdings every six months, but they are not required to publish them online, which is what we assume the survey uncovered.

What the papers say

The Guardian (and What Investment) led with the perspective that ethical funds were outdated or stagnating, which is an interesting perspective considering the phenomenal rise of the sector amongst high net-worth investors. Financial adviser magazine FT Adviser ran with the charge that ethical funds were failing their investors, which is a charge that could equally levelled at the magazine’s readership and a large portion of unethical funds. The Independent raised the perennial question, “Is ethical, really ethical?” while our friends at Move Your Money republished FairPensions’ own blog on the report.

The most egregious example was from the Investors Chronicle which found “angry” ethical investors all over the shop (well, two anyway).

We know that there are thousands of investors genuinely angry at the high rewards for executives during a decade of appalling share performance. Obviously, there are legions of investors who are legitimately angry at the role irresponsible financial players had in crashing the global economy, and the subsequent taxpayer-funded, economy-crippling bailouts. Many are profoundly annoyed by the payment protection mis-sellers and the unsolicited phone calls and texts, which that particular scandal unleashed. Those interested in more arcane things, such as central banks and regulators, are punishing the banks that rigged Libor.

But according to the Investors Chronicle, the richest vein of investor anger is the imperfection of ethical funds and their ‘poor performance’ during one of the world’s longest and deepest recessions.

The article quoted Seb Beloe of WHEB Asset Management as saying the deterioration in funds’ ethics is to be expected if providers are scrimping on staff. “Major providers don’t see ethical investment as a long-term money maker but they continue to run them cheaply because working with such large funds, it is still lucrative”, he said.

We contacted Beloe for a more general analysis. He explained four recent trends in the socially responsible investment (SRI) industry:

– “The large multi-boutique incumbent asset managers that had SRI businesses have undertaken strategic reviews of their SRI businesses that have led to decisions to sell (Aviva), to significantly cut back on resource (Henderson) or leave major unanswered questions (F&C).

– “Meanwhile, the market is broadening beyond the original ethical investor core to encompass investors who are more interested in investing in positive themes rather than just negative screens.

– “Smaller more focused (and typically unlisted) businesses that see this market as their core market are attacking this opportunity by investing in more sophisticated sustainable investing strategies – this includes engagement and transparency as core features of the investment approach.”

He went on, “We believe it is very difficult, if not impossible, to satisfy all investors’ ethical concerns in a limited number of pooled funds. By defining a fund by what it won’t invest in does make this problem even more challenging. This is because the screens are not seen as having any relevance to financial performance (in fact often quite the opposite!).

It is very difficult, if not impossible, to satisfy all investors’ ethical concerns in a limited number of pooled funds – Seb Beloe

“I believe that the individual investors quoted in the [Investors Chronicle] article may have responded differently if they had been introduced to  positively themed sustainability funds. Investors who are concerned about the future of the planet and of their pension should look at these sustainability funds. We are not tempted to shortcut the values because it is the values that underpin the investments that ultimately drive the financial value of the fund.”

Setting up an argument just so you can knock it down is a simple headline-grabbing and journalistic trick. What both the FairPensions and Investors Chronicle article have failed to recognise in challenging the “large multi-boutique incumbent asset managers” is the significant evolution of sustainable investment from a core of negatively screened ethical funds to a wide variety of “positively themed sustainability funds”.

A sector problem, a whole of market problem or simply a question of online publishing?

It is of course true that funds are generally opaque about their holdings, often only publishing online their investment by sector and their top ten holdings. There is almost always little or no investor engagement once you have invested, unless things go particularly badly or well. However, this charge can be easily, if not more assertively, levelled at the whole industry rather than just ethical funds.

FE Trustnet published an article in September entitled, Lack of transparency rights in UK funds “a disgrace”. The article stresses that “All US-domiciled funds have to report 100% of their holdings every three months and the information is published on the website of Finra, the US equivalent of the FSA. UK funds need only report all their holdings every six months, however, and there is no requirement for them to be published online.”

The internet is ‘catching on’; so much so that 84.1% of the population now has access. Publishing all holdings online every three months would be a leap forward for all funds and massive benefit to investors.

Should ethical funds be held to a higher standard? Probably. Could they do more in being transparent about what they invest in? Certainly. Should they engage with investors more readily? Of course. Do some funds use ethical (or related terms) as a marketing ploy? Sadly, yes.

All ‘ethical’ funds must do better. A lot, lot better, if confidence, prices and funds under management in the sector are to rise.

A clear and present danger

But real investor anger and media scrutiny should be directed at those 3,000 funds that do not open themselves up for this kind of scrutiny and wilfully invest in companies that profiteer in the short-term at humanity’s and the planet’s not so long-term expense. Screwing people and the planet for a fraction of a percentage should be the real source of anger amongst enlightened investors, serious commentators and the population as a whole.

Yesterday, Brad Werner, a complex system researcher from UC San Diego, colourfully described the prospects for the planet. He directly blamed our planet’s state on consumer culture, which prioritises short-term profits over long-term stability, saying, “What happens is not too surprising. The economy very fast chews up the environmental resource, depletes those reservoirs, resulting in significant economic damage.”

In a recent excellent article in Guernica, Indian author Amitav Ghosh said that, “At this point I feel quite despondent, as I think everyone does. I have friends who are scientists and climate scientists and, even though they won’t say so publicly, they all recognise the game is over.”

B&GT, in conversation with many climate scientists, hears the same story again and again.

It is a useful contribution to an important debate to be constructively critical of less than ideal behaviour from ethical funds. It is far more legitimate to be critical of the wilful profiteering and the destruction of the commons for personal gain by most funds.

Some journalists may find the whole thing a jolly jape, worthy of sloppy reporting and sniping on Twitter, but nothing could be more serious than the long-term viability of our planet.