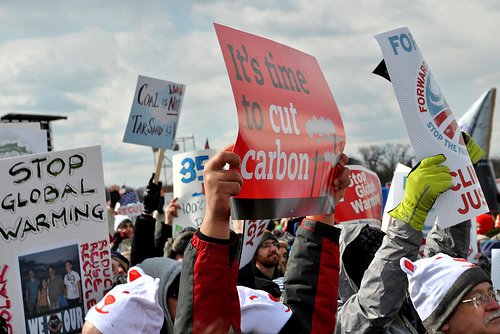 Thousands of people rallied in Washington over the weekend, asking Barack Obama to move “forward on climate” and to stop work on the Keystone XL oil pipeline.

According to organisers, more than 40,000 people, from citizens to organisations and pressure groups, invaded the streets of the US capital yesterday and gathered in front of the National Mall.

Protesters said that approving the construction of TransCanada’s Keystone XL pipeline would be a step in the wrong direction. The pipe will transport crude oil – the so-called “ethical oil” – from Canada to Texas, but will not reduce reliance on foreign oil in the US, according to Change Oil International, because it will be refined and then exported and will also raise bill prices, especially for farmers.

There are also numerous concerns about the safety of the pipeline. In the early stage of the project in 2011, The Guardian reported that it had had 14 accidents in its first years of operation.

The Forward on Climate rally also aimed to push the US government to take climate issues into account. This comes after a poll found that two-thirds of Americans want the president to take action on climate change.

“This president has the power to achieve the single biggest carbon reduction ever, by holding our biggest carbon polluters – dirty power plants – accountable for what they dump into the air”, said Van Jones, Natural Resources Defence Council trustee.

“Cleaning up this pollution and using more clean energy will provide jobs to thousands of Americans, save families real money when it comes to electricity bills and, most important, will make a real difference in our health and the health of our children.”

Nine out of 10 Americans in a recent poll gave their backing to renewable energy, leading to more questions about whether the Keystone XL pipeline is the right, most sustainable direction to go down.