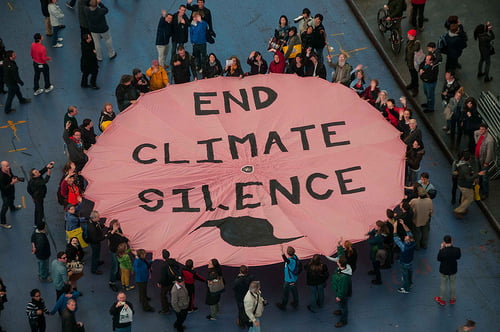 It is relatively easy to make wild promises, being an unelectable third candidate in US politics. The Green Party’s Jill Stein has a tendency to throw stones, but offers little insight into the effects on her own glass house.

There has been uproar amongst the worldwide environmental lobby regarding the so-called ‘climate silence’ during the three presidential debates between Barack Obama and Mitt Romney, and the vice-presidential debate between Joe Biden and Paul Ryan.

Respected academics and personalities such as Joseph Romm and our own Sir David Attenborough have endeavoured to fill this void by highlighting these omissions, and in the process proffering their stark views on the current effects of climate change. Romm notes that “more voters say they understand that humans are warming the planet — and will reward candidates who say they’d do something about the problem”, while Sir David cannot hide his exasperation that the “most powerful nation in the world, North America, denies what the rest of us can see very clearly” and affirms that “the situation is worse than we thought” regarding the melting of Arctic sea ice.

Even The Onion weighed in on furore with a unique take on the debate within a debate.

These are all valid points, and it is regrettable that the issue of climate change could not find its way onto the question cards of the debate moderators. There is however a danger of attaching too much significance to what is said in a debate without taking into account real action, and this is the territory into which Green Party candidate Jill Stein has strayed during this election.

Stein has levelled the charge of “climate denier” at the feet of Obama, and has insisted that the president “is not going to get us out of here alive”. She also asserts that his “climate policies are just as devastating” as his opponent’s. This is simply not the case, as I outlined in previous articles for Blue & Green Tomorrow regarding the clean energy policies and positions of both Obama and Romney.

It is definitely worth repeating that the stimulus package forced through by Obama in 2009 included a $90 billion investment in clean energy and energy efficiency, and this policy has been repeatedly used as a stick to beat the president with by his counterparts, including Romney. The governor did an impeccable job of summing up the policy difference in this regard when he mocked Obama in August, telling a crowd, “President Obama promised to slow the rise of the oceans and to heal the planet. My promise is to help you and your family.” Obama could be accused of hubris, but to say there is little policy difference in this regard is entirely disingenuous.

Stein also insists that “it is an absolutely false choice to tell people they have to choose one or the other” regarding the two main candidates. This statement is not only complete nonsense but also potentially dangerous, and perhaps fatal, to her cause. However much Stein, the Libertarian candidate Gary Johnson or any other third-party candidate would wish it otherwise, American politics is a stubbornly two-party system, and that is not likely to change – a cursory glance at election results over the last 200 years will confirm this.

There is a time and a place during a four-year electoral cycle for serious environmental lobbying, but it is not three weeks before the election. The Republicans know this, and they have the likes of Karl Rove acting as chief whips to keep their base in line.

Does anybody think that the gun lobby is any less concerned than the green lobby is regarding the outcome of this election? And how much have we heard about the second amendment during the current electoral process? The National Rifle Association is content to stand behind ‘Mitt the Moderate’ and as much as it pains me to say it, the progressive forces on the fringes in America could learn from this approach.

It is all too easy for Stein to play to these fringes with her brand of idealism but this is a time for pragmatism, and every single vote the Green Party gains is a vote that Obama loses. These lost votes are ones that Romney was never going to get. As was remarked in a recent Guardian piece about Stein, the Green Party certainly lost the election for Al Gore in 2000 – that’s Inconvenient Truth Al Gore, as staunch an advocate of environmental issues as there has ever been in mainstream politics. It would be a tragedy were it to happen again. Don’t let it.