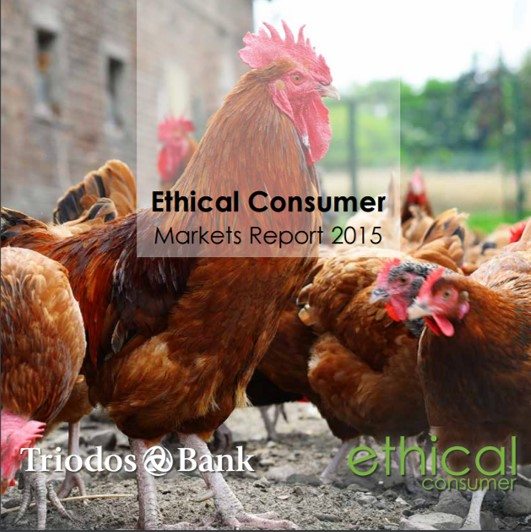 The value of ethical sales grew by 8%, during a period when inflation barely rose above 0.5%. And the overall value of the ethical market grew from £35bn to £38bn showing a continued commitment from consumers across all sectors to support more ethical products and services. Sales of electric, hybrid and other tax-band A-rated cars grew by 40% to nearly £7bn, and spending on solar panels rose by nearly 25% to £716m.

The value of money held ethically fell by 2%, largely caused by accounts being closed or moved from the Co-operative Bank. All other elements in the sector – including savings and investments with Triodos Bank – showed year on year growth. Ethical investment grew by 9% to £13bn. Combined ethical money and ethical spending totals rose from £78bn to £80bn.

In the food and drink sector, 2014 saw the first ever fall in a value of Fairtrade sales (4%) since the scheme began. This may have been caused by a combination of factors including falling market share at Sainsbury’s and the Co-op, Fairtrade’s biggest supporters in the retail sector, and growing sales at Aldi and Lidl, which have smaller Fairtrade ranges. The ethical food sector grew overall with a revival in organic sales, strong growth in sustainable fish sales, and a good performance in other ethical food sectors.

Charles Middleton, Triodos Bank Managing Director said: “Every one of has a role to play in tackling the pressing social and environmental challenges facing us, and making conscious choices about how we use our money is one of the most powerful ways each of us can make a difference. This includes the products we buy, the companies we buy from and the banks we entrust our money with. The report’s findings are a very positive sign for ethical consumption, demonstrating that despite continuing economic hardship, people are making conscious choices, and at a growing rate.”

Rob Harrison, Editor of Ethical Consumer magazine said: “Disappointing changes to government incentives for home renewable energy installations and lower impact motoring in 2015 will threaten the strong growth in sales of lower carbon choices identified in this report. Successive reports have shown that government incentives to encourage ethical behaviours can bring the most dramatic changes in consumer impacts and should be used more rather than less.”

The Ethical Consumer Markets Report has been acting as an important barometer of green spending since 1999 by tracking sales data across a wide range of consumer sectors from food to fashion.