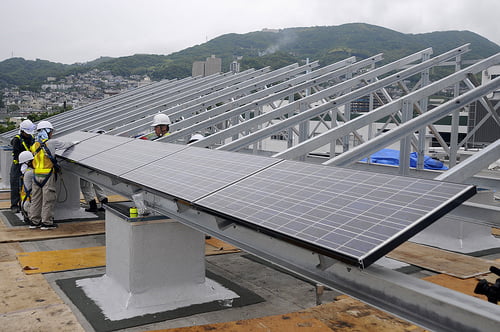 Over a third of 109 major Japanese companies believe renewable energy can sufficiently replace nuclear power in the country’s energy mix, according to a poll by a national news agency.

The Kyodo News study revealed that 35 firms highlighted solar or wind as feasible alternatives, while 10 picked out thermal power to fill the gap left by recently-suspended nuclear technology.

Only three companies of the 109 surveyed thought there was no substitute for nuclear, which has been put on the backburner in the country since the Fukushima disaster in March last year.

Nuclear is expected to still play a significant role in Japan’s future energy mix, but how much of a role this will be is still up for debate. Thirteen firms think it should provide 15% of the country’s energy in 2030, 11 chose the 20% band and four believe it should make up a quarter. One of the companies in the poll believes it should be phased out completely by then.

Kyodo News conducted the study between July and August amongst some of Japan’s largest corporations, including Sony, Toyota and Mizuho Financial Group. It aimed to gage optimism over the country’s energy future just over a year since Fukushima.

Many areas have experienced power shortages in the fallout of the event, with one report even predicting a 16% shortfall for western parts of the country.

But in the wake of the disaster, Japan has placed a greater emphasis on renewables, and solar power in particular. In April, manufacturing firm Kyocera Corporation announced plans to build a 70 megawatt plant on the southern island of Kyushu.

The project will provide around 22,000 households with electricity when completed, and is a vital step forward in Japan’s renewable future.