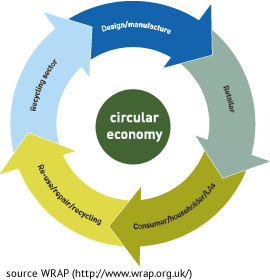 Northern Ireland could create 13,000 jobs through move to a circular economy

More than 13,000 jobs could be created if Northern Ireland moved to a circular economy, according to a new report launched this week, entitled “Job Creation in the Circular Economy – Increasing Resource Efficiency in Northern Ireland.”

The report reveals that jobs could be created at various skill levels across Northern Ireland and within a number of sectors, including food and drink, biorefining and the bioeconomy. The role of renewable energy and smart energy grids in enabling development of manufacturing is also a key factor for achieving greater traction in realising job growth potential.

The report aims to encourage wider understanding of the potential of the circular economy for jobs growth, stimulating action to create the means by which the CE can fully support the economic aims for Northern Ireland.

Produced by the ReNEW network, in conjunction with charity WRAP, the report will be launched today in Belfast.

Commenting on the report Environment Minister Mr Mark H Durkan said: “Building a circular economy is a win-win for the economy and the environment.

“It makes sense to keep our natural resources in use for as long as possible through recovery, reuse, repair, remanufacturing and recycling.

“This benefits the environment and can also drive economic growth by unlocking millions of pounds worth of value from materials used in key sectors in Northern Ireland which can drive economic growth. By departing from our traditional economic model of ‘make, use and dispose,’ we will be less vulnerable to dwindling natural resources, and increased price instability and energy costs.

“We must work together, across government, and in partnership with business and the community, to ensure that the North is geared up to exploit the exciting opportunities afforded by a circular economy.”