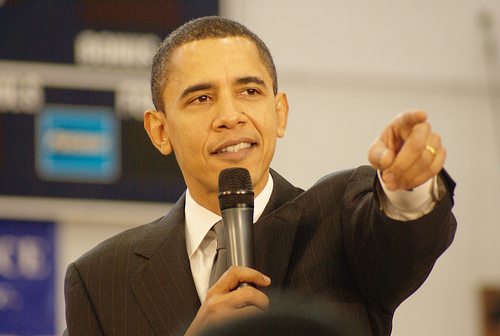 Barack Obama gave what many consider to be the most important speech of his presidency on Tuesday, declaring his commitment to tackle climate change and save future generations from a “planet that’s beyond fixing”.

The US president gave the speech at Georgetown University, outlining a comprehensive strategy to cut greenhouse gas emissions from power plants and to boost clean energy.

Conscious he will face opposition from Republicans and lobby group, Obama said, “Power plants can still dump limitless carbon pollution into the air for free. That’s not right, that’s not safe and it needs to stop.”

He added that he would not tolerate discussion about whether or not climate change is real from his political counterparts: “We don’t have time for a meeting of the flat earth society.”

However, he also reaffirmed his allegiance the nuclear and gas industries, saying they can help the US move towards a more sustainable future. He remained ambiguous over the controversial Keystone XL pipeline, but said he will consider the climate implications of the project before making his final decision.

Speaking about the Climate Action Plan Obama unveiled, Greenpeace UK executive director John Sauven said, “The president is embracing policies that will excite people around the world, and if the full potential of this plan is realised then we could look back at this speech as a landmark moment.

“At the very least it sends a huge signal. For years, since the failure of the Copenhagen summit and the onset of the financial crisis, politicians have ignored this issue. Now the world’s most powerful man is saying, ‘We’re going to talk about climate change again.’”

Meanwhile, Nick Molho, head of climate and energy policy at WWF-UK, noted the lack of interest in a similar plan from the UK government.

“It’s great to see a major initiative on climate from president Obama – but it highlights the fact that David Cameron has said virtually nothing on this issue since before the last general election”, he said.

“Now more than ever, with two of the next three major climate conferences taking place in Europe, we need leadership from our political leaders on climate change.”

“I welcome his Climate Action Plan. It’s a decisive step by the world’s second largest emitter and demonstrates the growing global momentum toward tackling the threat of dangerous climate change.”