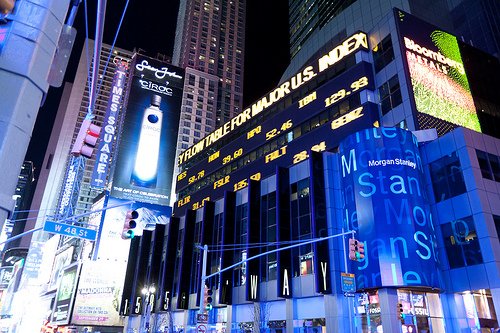 One of the world’s largest wealth management firms, Morgan Stanley Smith Barney (MSSB), has announced the launch of a platform that allows customers to incorporate personal values into their investment portfolio.

The ‘Investing with Impact Platform’ caters to the growing number of private investors who want their money to have a voice in global issues.

According to USSIF, the American equivalent of the UK’s Sustainable Investment Finance association (UKSIF), the scope for doing so in the US is massive, with some $3.07 trillion under professional management now invested sustainably or responsibly—that’s one in eight dollars.

Andy Saperstein, head of wealth management US at MSSB, said that the company “[hears] frequently from clients and financial advisors about the importance of integrating sustainability themes into their investment portfolios”.

The initiative is part of a long-term sustainable vision outlined by MSSB executives, and will look to offer clients the opportunity to consider the impacts of their investments.

As one of the many targets of the recent Occupy protests in the US—a movement that has led many people, naturally, to sustainable investment—Morgan Stanley faces a tough task in transforming its image from a greedy, profit-driven firm into one that also balances the needs of the planet and its people.

Indeed, it was placed fourth in a list of “climate killer” banks in December last year, because of its huge investment into heavy polluting industries.

However, the sheer scale of its wealth management arm, MSSB, which encompasses four million clients who have over $1.7 trillion of investable assets, means that its potential to lead a positive transition in the US could be nothing short of ground-breaking.

“Even a fraction of this total represents a substantial amount that could be invested in support of the common good”, added Paul Hutch, head of investment strategy and client solutions.

Earlier this month, it was announced that sustainable banks were outperforming their mainstream counterparts, proving a shift towards sustainability is not only morally viable, but financially, too.

Meanwhile, Barclays very recently hit the headlines for its inability to meet even its shareholder’s expectations.

And the hysteria surrounding Greg Smith’s resignation as executive director of Goldman Sachs in March adds further weight to the arguments against mainstream banks.

However, recent fines for “robo signing”, bribery and illegal mark-ups mean that Morgan Stanley still stands at the start of a very long road of sustainable redemption. But at least it’s the right road.

If you, like millions of others worldwide, are interested in investing your money responsible, Blue & Green Tomorrow’s Guide to Sustainable Investment keeps things simple and shows you where to begin.