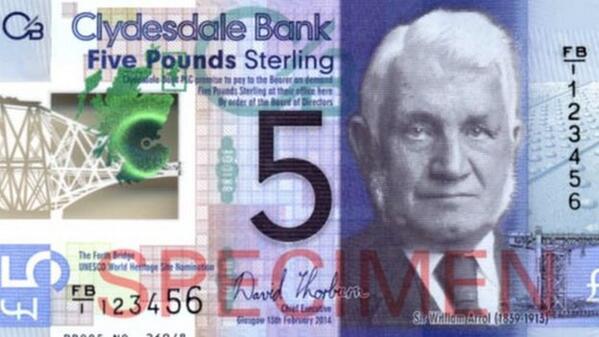 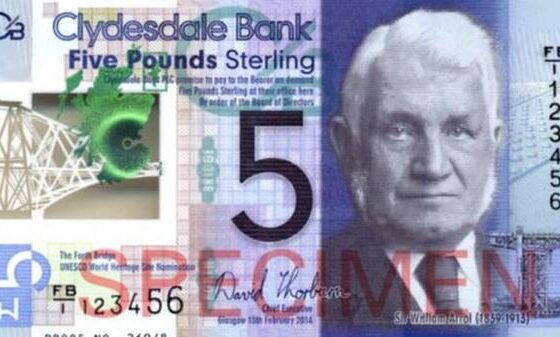 Plastic £5 notes to enter circulation in 2015

Two million polymer £5 notes are set to be printed by the Scottish bank Clydesdale and distributed for limited use in 2015.

The new banknotes, featuring Sir William Arrol – the man whose company built London’s Tower Bridge and Scotland’s Forth Bridge– will enter circulation for a year before the Bank of England begins printing them for general use in 2016.

Described as cleaner and more secure than paper notes, over 20 countries already use polymer notes, including Canada – whose plastic dollars were introduced by the current Bank of England governor Mark Carney.

Plastic banknotes are said to last more than twice as long as their conventional paper counterparts – and could even survive a spin in the washing machine.

The Bank of England announced late last year that plastic banknotes will be in circulation by 2016, featuring a “new diverse range of characters” on them.

Current production costs exceed £70m a year for banknotes alone – while the total expenditure of the Royal Mint between 2010 and 2011 came to £212m, including coins.

The decision to feature Sir William Arrol on the new £5 notes follows a debate last year over which historical figures should be the new faces of British currency.

The last woman to appear on a banknote, aside from the Queen, was Elizabeth Fry, who was removed last year in favour of Sir Winston Churchill.

A high-profile campaign for women to be better represented made headlines, with Conservative MP Mary Macleod describing the decision to choose another man as “completely unrepresentative of the role that women have played and continue to play in our country’s history”.

The Bank of England subsequently announced that esteemed novelist Jane Austen would replace Charles Darwin as the new face of the £10 note from 2017, in response to an online petition on Change.org that attracted thousands of signatures.