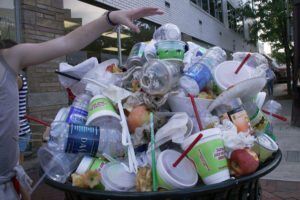 A campaign and report that was launched today to build pressure on London councils to drastically improve food waste separation and recycling rates aiming to reduce the amount sent to incineration and landfill.

The Tackling London’s Food Waste report, published by Bio Collectors, lays out the issues around food waste in the capital and launches a campaign to encourage change for the better. Just AD Food calls for councils to improve waste collection and disposal methods, in a bid to improve recycling and reduce emissions.

More often than not, councils send food waste in London to landfill or incineration with only 18 of 33 London boroughs collecting food waste separately. Critically, food waste that is segregated cannot by law be sent to landfill and should therefore be made a priority for councils. With food waste costing the UK more than £19bn a year (WRAP), as well as causing extensive damage to the environment, it is a problem that must be addressed.

The report also calls for raised awareness of the waste hierarchy. The average person still throws away as much as £200-worth of food each year, rising to £700 for families, according to Recycle for London. Disposing of London’s food waste is costing waste authorities more than £50m annually, and generating approximately 2.1m tonnes of CO2. More needs to be done to reduce the amount of avoidable food waste.

Since 2000, recycling rates in London have been steadily rising, but have now plateaued at around 33-34 percent. Landfill sites are filling up and AD plants in the UK are only thought to be operating at an overall 50 percent capacity. As the largest food waste collection and recycling company in London, Bio Collectors, processes around 100,000 tonnes annually. The question is, with 890,000 tonnes of consumer food waste produced in London a year – where is the remaining 800,000 going?

The four key objectives of the Just AD Food campaign are:

Bio Collectors works with a number of major hotel, restaurant and supermarket chains in the capital, offering an environmentally-friendly way of disposing of food waste by using anaerobic digestion (AD) as an alternative to landfill and incineration.

Paul Killoughery, Managing Director of Bio Collectors, commented: “Following our research into London’s food waste, our Just AD Food campaign aims to encourage London businesses to recycle more of their food waste. Our ambition is to put pressure on local authorities and decision makers who are still sending food waste to incineration plants or landfill, when it could be recycled responsibly, reducing the negative impact on the environment.

“The focus of shopping locally and eating locally sourced food should extend to how we deal with our food waste. This would then feed into the circular economy of food that travels from farm to fork, then back to farm.

“With the launch of our campaign, we have identified the four major barriers to the improvement of food waste disposal standards in London. Drawing attention to them via this report and through the campaign will hopefully mark the first step towards making a long-lasting difference.”