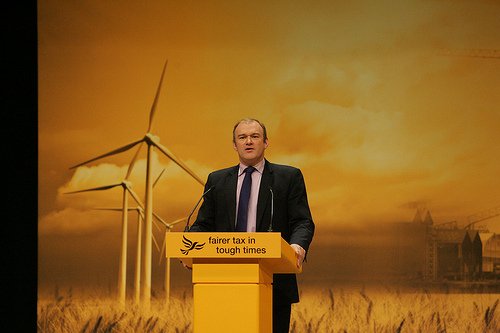 Three low-carbon energy trade associations have written a joint letter urging secretary of state Ed Davey to uphold his commitment to combatting climate change by decarbonising the energy sector by 2030.

RenewableUK, the trade body for the wind and marine sectors, along with the Nuclear Industry Association and the Carbon Capture & Storage Association, warn that failing to commit to such a target would mean missing out on a number of job opportunities.

The UK is tied to a legally-binding obligation to reduce its carbon emissions by 80% by 2030, and decarbonising the energy sector is seen as crucial to hitting this goal.

However, many government officials, including Osborne, have voiced their concerns over this transition, claiming that it could be too costly to undertake.

“The power sector will need to be largely decarbonised by 2030 if the UK is to meet its long-term emissions targets”, the letter written by the three associations reads, as reported by The Telegraph.

“If a reference were included in the energy bill to this objective, this would not only reassure potential investors by lowering the perceived political risks, but could also reduce the cost of capital for decarbonising the power sector.

“Any significant slippage could result in investment being postponed, with major implications for associated new industrial development and jobs in a hi-tech, high-growth sector.”

Osborne’s views on the matter were shown clearly in his budget statement in March this year, in which he championed gas as “the largest single source of our electricity in the coming years”.

This so-called ‘dash for gas’, though, was condemned by the government’s climate change advisers, the Committee on Climate Change, which said that such reliance on gas would be “incompatible” with the UK’s decarbonisation and climate change targets.

Investment in clean, abundant energy sources – wind, solar, marine and so on – is therefore seen as vital in not only meeting these objectives, but also providing long-term, secure and affordable energy.