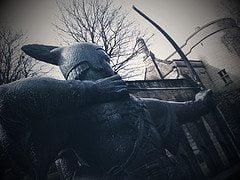 We first wrote about financial transaction taxes back in 2011. Here we take a look at those articles and the developments of the last four years. Progress has been glacial, at best in the UK.

The Robin Hood tax comes from a term coined by economist Hunter Logan in 1998 and refers to a package of financial transaction taxes (FTT), proposed by a campaigning group of civil society NGOs. In 2001 the charity War on Want released The Robin Hood Tax, an earlier proposal presenting their case for a currency transaction tax. By 2010 the UK had launched the campaign that we know today.

In 2011 we wrote how the Robin Hood Tax could be ‘Turning a global crisis into a global opportunity’, adding: “It’s been promoted by everyone from Bill Gates to the Archbishop of Canterbury and the Pope, but what is the so-called Robin Hood Tax all about.

“Styled as the tax which, like the folkloric Nottinghamshire outlaw from which its name derives, ‘takes from the rich and gives to the poor’, the Robin Hood Tax claims it will potentially generate billions of pounds to be used in the fight against global poverty.

“It would do this by placing a relatively small tax – a meagre 0.05% – on all financial market transactions in the UK. The general public, won’t be taxed a penny. Well, not extra anyway. It’s all focused on transactions made by banks and financial institutions.”

A year later, in December 2012, we wrote how Bill Nighy had called for a Robin Hood tax to create an ‘Aids-free generation’. “The actor, star of such films as Love Actually and Pirates of the Caribbean, explained that a Robin Hood tax, which takes from the rich and gives to the poor, could bring an end to a disease that claims the lives of 1.8 million people a year and affects about 20 times that number.

“In the UK alone, more than 90,000 people – more people than ever before – are living with HIV, with 25% of those apparently unaware they have the virus.”

UK chancellor, George Osborne, has opposed the levy. He, and others, argue it damage the City and weigh on growth, jobs and investment in the UK. In April 2013, Osborne, announced that the UK had filed a legal challenge of the decision authorising the use of enhanced cooperation to implement the FTT with the European Court of Justice.

In 2014 he told a meeting of Europe’s finance ministers concerning the introduction of the tax in 2016: “We need to hear more about what is being proposed, and it is up to member states to decide whether they want to damage jobs and investment in their own economies but if they seek to damage jobs and investment across the rest of Europe, then we’re entitled to challenge that.

“Our view has been that the financial transactions tax that people have talked about is not a tax on bankers as people present it; it’s a tax on jobs, it’s a tax on investment, it’s a tax on people’s pensions and pensioners and that is why the United Kingdom does not want to be a part of it.

“Our priority has to make sure, therefore, that the tax proposals that member states do come up with do not have an extra territorial impact both on the United Kingdom and on the broader European economy.”

The European Court of Justice subsequently dismissed the legal challenge in 2014, but didn’t rule out the possibility the UK could challenge the legality of the FTT if it is eventually approved. Osborne has threatened that legal challenge.

In September 2015, RobinHoodTax.org.uk said: “Right now, the UK government has set itself in opposition to this proposal that could raise billions of pounds a year. Much of the rest of Europe has committed to ensuring their financial sectors pay for damage caused – we must do the same.”

To find out more visit here.