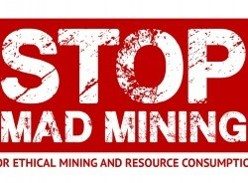 A Colombian delegation will grill BHP Billiton executives at their AGM over the mining giant’s environmental and human rights violations in Colombia. The AGM comes just weeks after the latest eviction of the village of Roche, near the Cerrejon coal mine. Further reports of threats and pressure at two other villages in the path of Cerrejon expansion have also come to light in recent weeks.

Outside the AGM they will be joined by activists visually highlighting the company’s impacts on local communities around the world and the environment, as well as the risks of the company’s coal investments in an era of greater regulation and fossil fuel divestment.

The Colombians will also speak about their first hand experiences of the operations of Cerrejon Coal, jointly owned by London-­listed mining companies BHP Billiton, Anglo American and Glencore, at a public meeting that evening at the Institute of Education. They will be joined by Green Party Leader Natalie Bennett and others speaking about the costs of coal and oil extraction in Colombia.

The events are organised jointly with War on Want and the Colombia Solidarity Campaign. More details here.