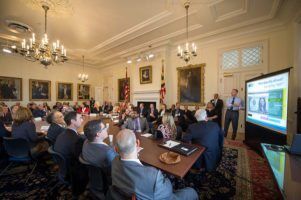 Companies responsible for the majority of fossil fuel products that have been manufactured, marketed, and sold since the industrial revolution have been ordered to respond to a legal petition that triggered the first-ever national human rights investigation concerning climate change.

The Commission on Human Rights of the Philippines (CHR) today sent copies of the complaint filed by the Petitioners, including disaster survivors, community organisations and Greenpeace Southeast Asia, as well as an official order, to the headquarters of the world’s largest investor-owned fossil fuel and cement producers. The order enjoins the companies to submit answers to the Commission within 45 days.

The 47 companies that were sent the petition and the order to respond to allegations of human rights abuses resulting from climate change include Chevron, ExxonMobil, BP, Royal Dutch Shell, Total, BHP Billiton, Glencore, Suncor and ConocoPhillips.

“We’ve been affected for so long by storms, droughts…by extreme weather, now made worse by climate change. We just want to live a decent and peaceful life, without fear and being at the mercy of big corporations that only care for their profits. Our only choice is to defend our rights. We want those most responsible to be held accountable. We want justice and to regain the ability to protect the little that we have left for our children”, said Veronica “Derek” Cabe, one of the petitioners from Bataan, where communities are fighting against coal storage facilities and proposals for a new coal-fired power plant and where one of the community leaders advocating against coal was shot dead on 1 July 2016.

The Commission launched a probe in 2015 looking into whether the world’s largest carbon producers are violating or threatening to violate the human rights of all Filipinos by significantly contributing to global climate change and failing to reduce emissions, despite having the capacity to do so.

The Petitioners have asked the Commission, among other things, to require the companies to submit plans on the steps they will take to eliminate, remedy and prevent the devastating effects of climate change, in a country known to be one of the world’s most vulnerable to these effects. The complaint also asks the Commission to monitor people and communities acutely vulnerable to the impacts of climate change.

“Ultimately, those who have profited most from pumping carbon dioxide into the atmosphere must bear the burden of preventing the havoc already being wreaked by climate change. This is the first step in that process. The courageous Filipino people are the first to put the world’s largest carbon producers on notice that they must account for their emissions,” said Jennifer Morgan, Executive Director of Greenpeace International.”

Ultimately, those who have profited most from pumping carbon dioxide into the atmosphere must bear the burden of preventing the havoc already being wreaked by climate change.

The Commission’s actions are unprecedented. For the first time, a national human rights body is officially taking steps to address the impacts of climate change on human rights and the responsibility of private actors. After the company responses are received, the Petitioners anticipate hearings will commence in the Philippines in October 2016.

The Petitioners are calling the companies’ business plans into question and asking governments around the world to keep fossil fuels in the ground. This is another signal to the fossil fuel producers from people that they cannot continue business as usual.

There is a growing global climate justice movement working to strengthen the capacity of people around the world to take action inside and outside the courts.