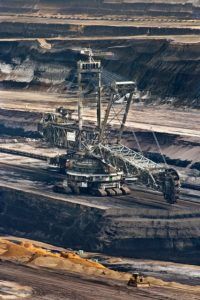 A group calling themselves “The Oxymoron Appreciations Society” hung a banner across the entrance to the Crowne Plaza hotel in London this morning, where the Responsible Extractives Summit was set to get underway. The group announced themselves as “sponsors” of the event, which includes speakers from controversial fossil fuel companies. Some of the mining companies in attendance are entangled in corruption, environmental destruction, community upheaval and human rights scandals.

The banner read: “The Oxymoron Appreciation Society proudly presents the Responsible Extractives Summit 2016” and delegates were leafleted as they entered the hotel to register, with flyers outlining some of the controversies and scandals that some of the keynote speakers’ companies were involved in.

Speakers at the event included scandal-ridden mining corporations such as: Rio Tinto, Barrick Gold, Anglo American, OceanaGold, Beowulf and more, involved in local conflicts surrounding their mines around the world, or embroiled in corruption or environmental scandals.

Samuel Arregoces, a villager from the community of Tabaco, Colombia, whose village was displaced by the Cerrejón coal mine (co-owned by Anglo American) in 2001 and has yet to be resettled, said: “While Anglo American makes its profits, La Guajira is being polluted and dying of thirst. Capital at the expense of our blood and our displacement. La Guajira: 30 years of sadness, suffering, displacement and impunity. And the companies call themselves responsible? Anglo American’s actions do not contribute to peace in our Guajiran lands – they are the cause of forced displacement.”

Mamy Rakotondrainibe, from Madagascar, fighting against the so-called ‘biodiversity offsetting project run by QMM, Rio Tinto’s Malagasy subsidiary, says the project is a “double land grab. To claim green credentials the company not only occupies community land at the mine but is also prohibiting local land use at the forest site claimed as ‘biodiversity offset’. The biodiversity offset is increasing risk of hunger and deprivation of these subsistence farming communities as far as 50 kilometres away from the mine.”

Andy Whitmore, of London Mining Network, who work in solidarity with communities affected by UK-based mining operations, said: “Terms like ‘ethical,’ ‘sustainable,’ and ‘responsible’ were once used to hold an unscrupulous mining industry to account. Now, through events like the so-called ‘Responsible Extractives Summit,’ companies have taken this language and strip-mined it of any meaning. The idea that serial offenders like Rio Tinto and Anglo American could be given a platform at an event calling itself ‘responsible’ must be a dark form of satire on the part of the organisers. Alternatively, if these truly are the most responsible players in the mining sector, there are fundamental questions about the existence of this industry that seriously need asking.”

A crowd-sourced Tumblr blog, responsibleextractives.tumblr.com, has been created to highlight a wider range of the unethical behaviours associated with the companies speaking at the event.