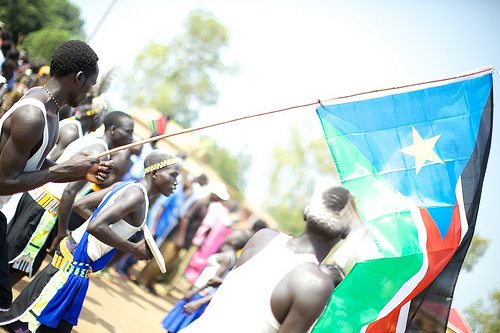 Rebels in South Sudan have taken control of the key oil-producing town Bentiu, leading to global concerns around the output of oil.

The African nation, which gained independence in 2011, depends on the production of oil, with more than 98% of its revenue coming from the industry. A recent study found that South Sudan’s economy is at risk due to climate change, partly because of its heavy reliance on the fossil fuel.

Violence broke out in the country’s capital Juba on December 15 and has since spread. The turmoil began when the country’s president Salva Kiir, of the Dinka ethnic group, accused former vice-president Riek Machar, of the Nuer ethnic group, of trying to launch a coup. Over the last week, an estimated 500 people have been killed as a result of the conflict and thousands have fled their homes.

Some 245,000 barrels of oil come from South Sudan every day. Brent Crude, the benchmark price for crude oil, hit a two-week high at $112 (£68) per barrel on Monday as conflict in South Sudan and other areas have an impact. Saudi Arabian oil minister Ali al-Naimi explained that the price increase was due to expectations of a shortage in supply.

Industry executives told the Financial Times that oil companies have started to reduce production in some oilfields and the output loss could not yet be quantified.

One executive said, “The loss will depend on what happens this week on the ground. If the fighting continues near the fields, we will see more wells shut down. If both sides guarantee some security, the production may continue.”

Global oil supply is already under pressure due to issues in Libya and Nigeria, which produce an estimated 1.1m and 350,000 barrels per day respectively.

South Sudan was one of the countries highlighted in a recent report as having an increased risk of natural disasters because of climate change. As a result, it could experience enhanced poverty.

The Republic of Sudan is also experiencing conflict. Campaign group Investors Against Genocide claimed that investment firm Fidelity had continued to invest in companies tied to the Sudan government despite it “currently bombing, starving and displacing massive numbers of its own civilians”.