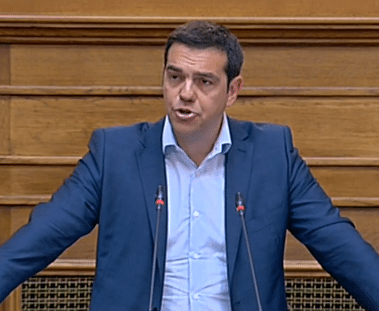 Greek prime minister Alexis Tsipras has refused to cave in to pressures from the country’s creditors, saying that his government has done all it can to solve Greece’s debt crisis.

Speaking to Greek MPs in parliament, Tsipras said that it was the intention of lenders to was to humiliate the Greek government and to use the negotiations to show the extent of their force. He added that he and his team were negotiating in good faith.

Earlier on in the day, he had said that until a deal was reached between Greece and its creditors, he would be unable to make a €1.6bn debt repayment owed to the International Monetary Fund (IMF) on 30 June.

Tsipras’ speech came at a crucial moment as fears were growing over the prospect of Greece defaulting on its debt, which could lead to the country being forced to withdraw from the European Union.

But he insisted that despite talks with the International Monetary Fund (IMF) breaking down, there were powers within Europe that are working for a fair deal for Greece.

He told MPs that the European Central Bank (ECB) was insisting on the line of financial strangulation, adding that he found himself in the present situation as a result of the IMF’s insistence on austerity measures and Europe’s refusal to grant debt relief.

He also called on EU leaders to agree to debt restructuring proposals, something that the IMF has also said needs to happen.

“Why do [European leaders] accept [the IMF’s] harsh measures but not its proposals for debt restructuring?”

Tspiras concluded that he would remain focused on working toward reaching a deal, but one that remains within his mandate of bringing an end to austerity in Greece.

He said, “The mandate we have got from the Greek people is to end austerity policy.”

“In order to achieve that, we have to seek a deal which will spread the burden evenly and which will not hurt wage earners and pensioners.”

The main issues of contention between Greece and its EU creditors are pension reforms, market reforms and taxation. Tsipras has refused to negotiate on these key areas but has said that he is willing to come to a deal with creditors in order to unlock the final instalment of the bailout loan it needs to pay its bills.

The IMF walked away from talks last week, citing the little progress that had been made with Greek negotiators as the reason. Gerry Rice, spokesperson for the IMF insisted however that they remained at the table to come to an agreement with negotiators.

Greek finance minister Yanis Varoufakis has said that he will not be bringing further proposals to a meeting of Eurozone ministers due to take place on Thursday.

The financial markets across Europe has been suffering hits as a result of the unstable situation, with many fearing Greece could be forced to leave the EU if it defaults on its debt repayments.