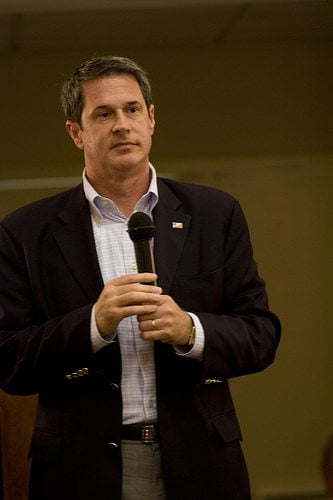 Billionaire asset manager and philanthropist Tom Steyer has asked US senator David Vitter to donate the campaign contributions he received from fossil fuel companies to charity.

According to Steyer, Vitter’s campaigns running for office have received significant funding from the fossil fuel industry. He has urged the Republican to distance himself from “any tainted financial benefits” by giving up the money to a charity of his choice.

The public feud between the two men continues from June, when Vitter questioned when Steyer’s asset management firm would divest from US oil pipeline company Kinder Morgan.

Steyer responded, saying that much of his fossil fuels portfolio was in the process of being divested and placed in a fund that does not invest in either tar sands or coal.

The fossil fuel divestment movement, led by the likes of environmentalist Bill McKibben and his campaign group 350.org, urges investors owning shares in fossil fuel companies to divest as a means of tackling global warming. These firms’ share prices would fall in the process.

Norwegian pension fund Storebrand and Dutch bank Rabobank are two financial institutions that have recently revealed their intentions to move away from high-carbon industries. The Church of England is also considering whether to divest completely from fossil fuels, while several universities and cities across the US have already done so.

Speaking to Blue & Green Tomorrow, McKibben described fossil fuel divestment as “the answer” – even though it may be “inconvenient” for many investors.

Meanwhile, the Guardian reported on Tuesday that internet giant Google is to host a fundraiser for Oklahoma Republican Jim Inhofe, a climate change denier.

Last month, the firm donated $50,000 to the conservative thinktank Competitive Enterprise Institute (CEI). Some of the CEI’s present and past funders are among the biggest polluters in the US.