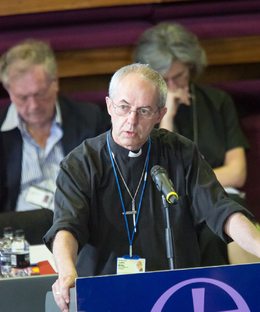 The archbishop of Canterbury has waged an economic war on payday lenders, with his weapon of choice being church-backed credit unions.

After recently launching a credit union available exclusively to the clergy and church staff, Welby also said that credit unions had a vital role to play in the battle against payday lenders.

A spokesperson from the Association of British Credit Unions Limited (ABCUL) welcomed the church’s support, saying, “The wide community reach of the organisation and the skills within its congregations mean it is one of many groups that can help grow credit unions and we are in discussion with the Church of England about how this can be achieved.”

Payday lenders, which offer short-term loans with extremely high interest rates, have been described in the past as “out of control”, and accused of preying on the most vulnerable borrowers.

The ABCUL spokesperson added, “We believe it is speed and convenience which attracts people to payday lenders, not the short-term nature of the loans.

“Credit unions have been shown to be best value in the UK market up to about £2,000, and many will match bank rates for higher value loans as well. They lend responsibly and ensure repayment terms are affordable for the borrower.”

Out of control payday lenders accused of irresponsible practices

We must fight to end legal loan sharking