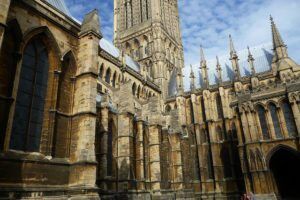 More than 3,500 UK churches have either switched their electricity from fossil fuels to renewables or registered to do so, according to figures released by charities today.

The announcement coincides with the World Day of Prayer for the Care of Creation on September 1, the beginning of a global ecumenical time of contemplation during which Christians are encouraged to pray and work for the protection of the environment.

Around 2,000 of the switches come from 16 Catholic dioceses which are running entirely on renewable energy, some of whom made the decision following the Pope’s encyclical for the environment, Laudato Si. The number also includes the majority of the Salvation Army’s UK sites and a third of Britain’s Quaker Meeting Houses.

In addition, nearly 700 churches from across denominations have so far individually signed up through thebigchurchswitch.org.uk website promoted by the charities Christian Aid and Tearfund. Following the success of the initiative, this will now be extended into the New Year.

The Rt Revd John Arnold, Bishop of Salford – one of the 16 dioceses to have switched – and chairman of Catholic aid agency CAFOD, said: “There are many ways in which we may respond to the threat and the reality of climate change and adopting renewable energy for our church buildings must be a priority. Pope Francis challenges us all to ‘care for our common home’, and by adopting renewable energy we will directly help people threatened, and already most severely affected, by climate change.”

The Christian community has come together to help lead the shift to clean energy – we’re showing that we care for our neighbours.

The Rt Revd Nicholas Holtam, Bishop of Salisbury and Church of England’s lead bishop on the environment, said: “Celebrating Creationtide marks a shift in the Christian understanding of our relationship to creation under God. The consequences of teaching over recent centuries that humanity has been given domination over creation are clear in the complex environmental crisis we now face. It is important that Christians rediscover older traditions of a godly relationship of humanity to the wider created order. One simple thing we can do in response to such a crisis is to switch to using clean energy in our homes, communities, schools and places of worship”.

Christian Aid Chief Executive Loretta Minghella also welcomed the news. She said: “We need a big shift to renewable energy and a shared commitment to leave the vast majority of fossil fuel reserves in the ground. This action by thousands of churches shows a groundswell of public support for renewables to which governments must respond by doing all they can to shift to a clean energy future.”

Tearfund Advocacy Director Paul Cook said: “The Christian community has come together to help lead the shift to clean energy – we’re showing that we care for our neighbours, we care for creation, and we care that the government takes urgent action too. The longer we postpone, the worse it will be for our future and the future of people living in poverty around the world.”

Some 340 congregations have also signed up to a broader scheme ‘Eco-Church’, committing to a range of environmental improvements. Similarly, 21 Catholic parishes have received a ‘Live Simply’ award, in recognition of commitments to sustainability and solidarity with people in poverty.

Dr Ruth Valerio, founder of the Eco-Church programme, said: “I sense that a corner has been turned with churches engaging in caring for the earth. The Bible is so clear that God loves the whole creation, both human and non-human, and that we are to love similarly, and so it is really encouraging to see us getting to grips with what that means and taking practical action”.

September 1 is the first day of Creationtide season, which runs from September 1 until October 4, incorporating traditional Harvest activities. The following week – from October 8 to 16 – churchgoers from across denominations will take part in the ‘Speak Up Week of Action’ during which they will join with others to explain to MPs the people, places and things they want to protect from climate change, asking the UK Government to announce an ambitious low carbon investment plan for Britain.