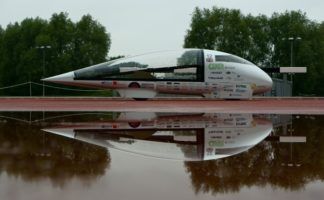 One of the race’s key aims is to encourage car-company innovation and lead to more efficient, less environmentally destructive vehicles.

The EU has estimated over 500,000 Europeans a year may be dying from conditions related to air pollution, with vehicle emissions being a significant factor in this. A US study similarly showed that cutting emissions from transport and energy generation would cut 300,000 US deaths.

Diesel exhausts account for 70% of particulates in London, meaning the move to electric vehicles are essential in large cities. But it is in these, where garages are less prevalent, that it is harder to charge vehicles at home.

Could solar be an answer, even in the UK?
Yes, according to analysis by engineers from Solar Team Great Britain, a solar race team that will race at next year’s World Solar Challenge race across Australia. The team’s engineers calculate that solar cells mounted on the roof of a car based in London would generate enough energy each year to power nearly 1,500 miles (2,400 km) of emission-free driving.

Steven Heape, head of Solar Team Great Britain said: “People think the UK and Europe have the wrong climate for solar – this is a 24-hour endurance race and if it can be done for this event, then solar should absolutely be part of the way we cut emissions from vehicles.”

Analysis:
Figures would vary significantly by car, with weight and aerodynamics being key deciding factors. Using the Renault Zoe, a small 5-seat all-electric city car that has a practical summer range of 106 miles, a battery size of 22 kWh (pdf) and approximate roof area of 1150 x 1600 mm (1.8m2)

Filling this roof area with standard silicon solar cells (218.88Wp per M2 with an efficiency of 22.4%) the total annual power production for a car in London would be 300 kWh (approx) which would deliver an increased range of 1,445 miles.

Materials advances could triple this
Figures are based on roof top solar only and capacity would increase by extending to the bonnet or altering the design to increase the overall roof area.

Climate also makes a significant difference. Irradiance levels in Monaco would increase the solar panel output (and hence the available range on solar) by 31%.

Cars in the Bridgestone World Solar Challenge are significantly exceeding these numbers through innovative power delivery and construction techniques, typically covering over 500 kilometres per day under solar power.

But advances in solar technologies could potentially almost triple this range. With scientists at the École Polytechnique Fédérale de Lausanne, Switzerland, publishing work last year that could lead to graphene based solar cells with efficiencies up to 60%.