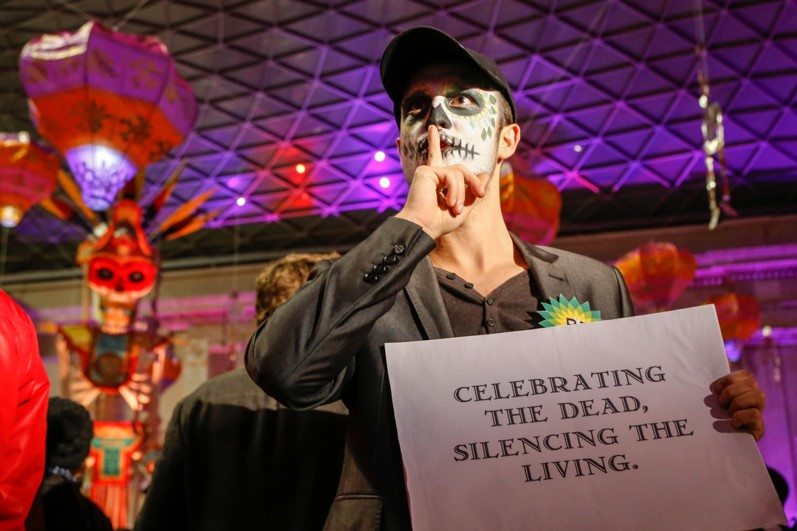 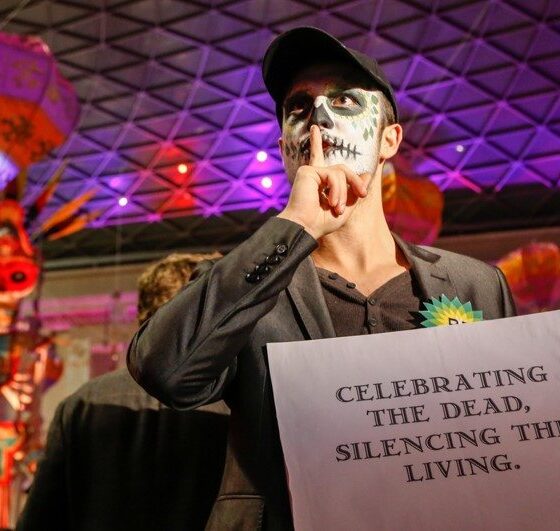 On Friday, 50 Latin American and British activists joined together to mount a highly visual performance-protest during the British Museum’s ‘Day of the Dead’ festival. The evening event was co-sponsored by BP and the Mexican government, and campaigners accuse the museum of playing host to a ‘deadly partnership’ which is covering up a host of human rights and environmental abuses.

Six sinister characters, with deathly “Day of the Dead” painted faces, played the roles of BP and the Mexican government, striking dirty deals and stamping out dissent. Meanwhile, other performers created a “living shrine” to celebrate the communities fighting back against destructive oil projects and state repression in Mexico.

The performance was repeated around the museum, and at one point a group of campaigners invaded the Museum’s official stage with banners criticising BP and the Mexican government. The invasion received loud cheers and applause from the audience and visible support from the official performers, who laid one of the group’s banners out on the stage before it was removed by museum staff. Museum security were eventually forced to allow the rebel performance to happen beside the stage in its own agreed time slot, without interruption from the sound system or the scheduled entertainment.

The performers remained in the Museum until closing time, with the deathly BP characters roaming the space and interacting with Museum visitors. Campaigners distributed 1,000 flyers and found overwhelming support from the public.

The evening-long protest-performance aimed to embarrass BP as it attempts to sell itself to Mexican officials and the public. It was co-organised by the London Mexico Solidarity Group and BP or not BP? and highlighted BP’s environmental destruction, human rights abuses and lobbying against climate action. It also accused the Mexican government of trying to distract attention from human rights abuses – including the disappearance a year ago of 43 students – and of co-opting arts and culture to attract foreign investors to its newly-privatised oil and gas sector.

A member of London Mexico Solidarity who took part in the performance said, “Tonight we exposed the reality of the dirty relationship between BP, the Mexican Government and the British Museum. We stood in solidarity with the many thousands of people in Mexico who are fighting back against destructive oil and gas projects and state repression.”

Jess Worth of BP or not BP? said, “The audience response to our stage invasion should leave the Museum in no doubt that BP is a deeply unpopular sponsor, and the Mexican government partner, given its track record on human rights. It’s time the Museum listened to its visitors and ditched these dodgy partnerships.”

The British Museum event – part of a four-day Days of the Dead celebration – is part of the Dual Year of UK and Mexico 2015, ‘a year-long celebration of cultural, educational and business exchange’ between the two nations.

BP is currently trying to dramatically increase its access to Mexico’s oil and gas, in particular more deepwater wells in the Gulf of Mexico, despite the catastrophic Deepwater Horizon disaster which has polluted Mexico’s waters and coastline. As Mexico recovers from Hurricane Patricia – the strongest hurricane ever recorded – the country is also already feeling the effects of climate change caused by burning fossil fuels.

The British Museum is coming under increasing pressure over its 5-year sponsorship deal with BP. It is due to decide whether to renew the deal over the next few months, and protest performances regularly disrupt the museum.