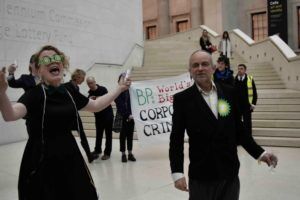 The sponsorship deal between BP and the British Museum has been questioned after Freedom of Information disclosures have revealed  there is an ‘ethical black hole’ at the centre of the UK’s most visited cultural institution. [1]

The revelations come on the same day museum trustees meet in Manchester for an ‘away day’ – believed to be the first time they will meet since the museum announced it was renewing its five-year deal with BP in July. Art Not Oil can now reveal that, despite high-profile controversy and widespread public and staff opposition, [2] trustees were not given a say in this decision

The new evidence uncovered by the Art Not Oil coalition reveals:

● The decision-making process as promised by former director Neil MacGregor was not adhered to. He told staff ‘Any ethical questions which arise in the context of the Museum’s activities or sponsorships are discussed and decided by the Board of Trustees.’
● The trustees were not involved in making the decision to renew the deal, which was left in the hands of new director Hartwig Fischer. Trustees were merely ‘informed’ just before the announcement was made.
● The museum has no ethics committee – and it scrapped its dedicated ethics policy on the same day that a major BP-sponsored exhibition opened.
● The museum claims that the ethics policy available on its website until recently was never official.
● The museum does not appear to have assessed the ethical issues related to BP’s sponsorship, despite the risks it posed to the museum’s reputation.
● The museum claims that no correspondence took place between staff and BP in the months leading up to the announcement.

The revelations come a week after a huge ‘splashmob’ protest in the museum indicated that opposition to the BP sponsorship deal continues to grow. Over 200 ‘actorvists’ took part in an hour-long mass ocean-themed flashmob in the museum’s Great Court, organised by theatrical protest group and Art Not Oil coalition member BP or not BP? [3] The unsanctioned performance featured singing mermaids, BP pirates and a giant 40-foot kraken puppet the group smuggled in despite security bag checks. The performance highlighted the bizarre irony of BP’s sponsorship of the museum’s Sunken Cities exhibition when it is making such a large contribution to global warming, and called for the new BP deal to be overturned before it officially begins in 2018.

Jess Worth, from Art Not Oil, said:

We expect dodgy deals from BP, but not from the British Museum, which appears to have an ethical black hole at its heart.

“If there had been proper ethical scrutiny, there’s no way BP’s sponsorship could have been renewed. But without a dedicated ethics policy, an ethics committee or active oversight by its trustees, the director could overlook BP’s role as one of the world’s most destructive fossil fuel companies and ignore the damage it is doing to the museum’s reputation. The renewal meets neither the ethical standards we expect of leading museums nor the ethical standards being demanded by the public. This deal is illegitimate and must be reversed.’

‘Last year, we wrote to Neil MacGregor with the PCS Culture Sector’s concerns about BP sponsorship at the British Museum. He assured us that any ethical questions arising around sponsorship are discussed and decided by the Board of Trustees, and that they take this very seriously. I am now finding out that the Trustees were merely “informed” rather than taking the decision. This is very disappointing. When we carried out a survey of staff at the museum back in March, 62% thought oil sponsorship was not ethical. It is time for Big Oil to become persona non grata in our museums, just as tobacco companies are. Climate change is happening now and these fossil fuel corporations shouldn’t be given a license to build a reputation as philanthropists rather than the climate-wreckers they are.’

In July, BP announced a new 5-year sponsorship deal with the British Museum, the National Portrait Gallery, the Royal Opera House and the Royal Shakespeare Company, but slashed its total spend from £10m to £7.5m. Earlier this year, the end of BP’s sponsorship of Tate and the Edinburgh International Festival was announced after 26 years and 36 years respectively, following sustained creative protest.