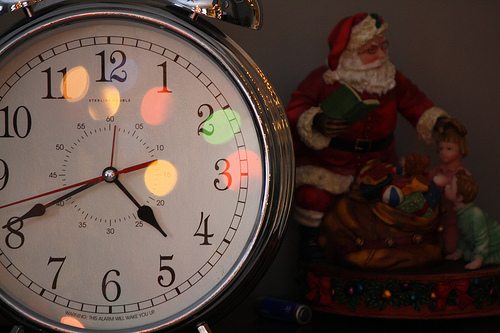 All I want for Christmas is… more time

In 2012, I asked my wife what she really wanted for Christmas. “Time” was her succinct answer. With two energetic boys under four, most parents will understand that request. More than ever, I realise how perfect her response was. Not just for my family but for all of us. Time is running out and the actions we are taking are not equal to the challenges we face.

We need more time to reform our economics, revive our democracies, reduce, reuse, recycle our consumption and renew the energy upon which much else depends.

Sadly, we do not have more time as we approach peak everything and exceed Earth’s carrying capacity. Peak everything is the point where we exhaust Earth’s natural resources and enter a period of inexorable decline. Carrying capacity is the maximum population of a species that the environment can sustain indefinitely.

Using finite resources to fulfil inexorably rising demand, relying on commodities with volatile prices, and sourcing them from unstable or unsavoury regimes, is reckless. It reflects the failure of our economic system to value externalities and our political system to provide real leadership.

Humanity is entering an extended and unprecedented period of volatility, uncertainty, complexity and ambiguity. Rising population, with rising affluence and consumption, while facing declining resources, is a recipe for disaster.

There have been periods when we took great leaps forward. We have seen the abolition and emancipation of slaves, enfranchisement of women and the poor and greater equality (in everything but wealth, which is moving in the other direction). Liberal democracy, with equal rights and the rule of law may not be evenly distributed, but it is moving in the right direction.

Between the 1950s and 70s, the clean air acts, environmental protection laws and the conservation movement began to emerge. We identified CFCs as a threat to the ozone layer and took concerted global action to address the problem. In the 1980s, prime minister Margaret Thatcher, having read and understood the climate science, moved to help create the Intergovernmental Panel on Climate Change (IPCC). She may have renounced her statesman-like leadership in this area in her later years, but it was the ideological aspects of the debate, not the science, that troubled her.

Her legacy, along with her soulmate Reagan, was unfettered financial speculation. This was not the creatively destructive capitalism that they professed to support. Instead we had crony capitalism, predatory capitalism, cartel capitalism, too-big-too-fail capitalism, underwritten by casino banking. And when those casinos failed, the state raced to the rescue, in the biggest transfer of wealth from poor to rich since the Norman invasion. With capital allowed to move freely across borders, the rule of law was diminished considerably. The people and their elected representatives could be bullied.

Undemocratic, autocratic corporations and countries have prospered, while we have done everything we can to race the bottom. Removing the welfare safety net, privatising monopolies, selling our national assets to other nations, spying on our own people and allies and acting unlawfully in wars of aggression, showing we have no disregard for international law and human rights. If we don’t follow the rules (and we bloody wrote them), why should anyone else obey them?

All the time we are told the developed world is in terminal decline. Leading politicians and the press want you to believe you are powerless; that your voice doesn’t count. Just borrow, consume and die. Thank you very much.

In horrible echoes of the 1930s, they want you to believe it is the ‘other’ that is to blame for our creaking economy, health, education and infrastructure. The illegal immigrant and the skiving poor, or both. This is all to distract you from the fact that is it the wealthiest who have driven us to bankruptcy. The rich take from the poor, the old from the young and those born in prosperity attack those born in fear. This is a reversal of everything we fought for in 1914 and 1939, and throughout most of the cold war.

Our relative decline is because we have sold every moral and ethical constraint we ever had, permitting others to rise. In financial centres around the world, profit maximisation shall be the whole of the law, even if it means selling out your own people and country, while harming other people and the planet.

This behaviour puts us in the perilous situation we now face. Our planet is under threat and our liberal democracies are under threat. Our weak political leaders are in the pocket of those who will most profit over the short-term, even embracing foreign dictators who pay them enough.

We need more time to organise and transition our economy, politics and society onto a more sustainable footing. We need an effective resistance as there is no opposition in town halls, Westminster, Washington or Brussels.

We do not have more time.

There are a lot of meaningless distractions that disguise lazy inaction as action: voting UKIP, signing endless petitions and marching in local high streets. It might make you feel good but these are a proxy for real action.

Our real power is who we invest in, whose products we buy and who we vote for. We have to use the very systems that got us here against those who seek to harm us.

Invest sustainably, buy ethically and vote for those parties that disrupt the status quo.

Buy a sustainable, ethical or green ISA and move your bank account. If you have a considerable portfolio, aim to invest at least a third of your funds in sustainable stocks. Invest in cleantech and renewables. Look for fair trade products and buy locally. Use co-ops or mutuals where you can. Switch to renewable energy suppliers like Good Energy or Ecotricity. And only vote for parties, individual councillors, MEPs and MPs who commit to concerted action to address the serious issues we face. And hold them to it.

We do not have more time.

All I want for Christmas is for all of us to treat each other and our planet with a lot more care. And actually do something to actually make that happen.