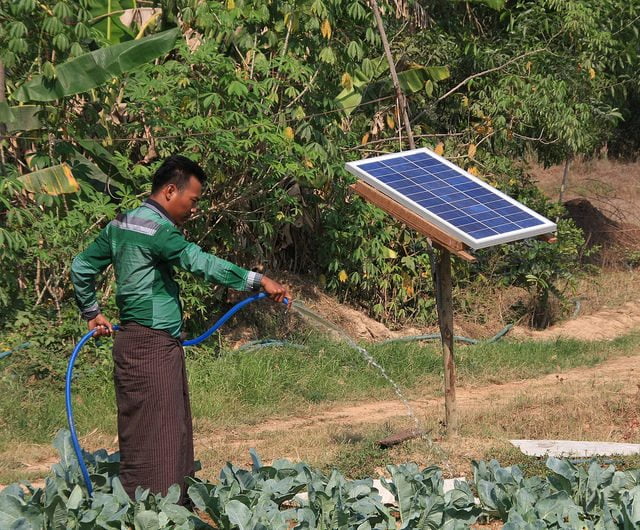 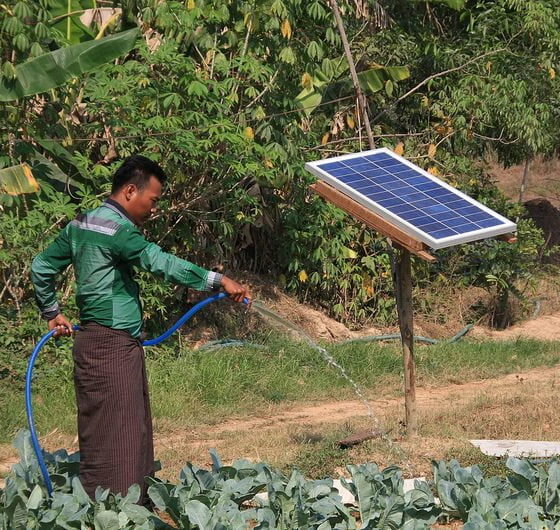 The Ashden Awards uncover and reward sustainable energy pioneers in the UK and across the globe, to date it has given out 170 prizes. Proximity Designs was one of the five international winners in the 2014 awards.

Bringing energy to agriculture for the first time in Myanmar

– 58% of Myanmar’s population depends on agriculture (about 23 million people).

– Irrigating just a small plot of farm land requires about 3,000 litres of water a day.

– 132,864 households have purchased at least one of Proximity’s irrigation products, generating a total of $197 million (£131m) in increased rural income.

Until very recently, the only way for farmers in Myanmar to water their crops was to manually lift buckets of water from wells and carry them through the fields. This was backbreaking and time-consuming work and meant that only small areas of crops could be watered at a time.

Myanmar-born Debbie Aung Din and husband Jim Taylor saw how this lack of energy was holding the country back and decided to move here in 2004 after decades working in development and public policy. They decided to focus on designing affordable products for Myanmar’s farmers and arrived from America with just two treadle pumps to start them on their design journey. Originally known as IDE Myanmar, Debbie and Jim founded Proximity Designs in 2008. Although a grant-funded NGO, it operates on a social enterprise model, so charges appropriately for its products and services.

Proximity won the 2014 USAID Ashden Award for Energy and Agriculture.

Since winning, Proximity’s field teams have received sales training from Whitten and Roy Partnership through Ashden’s business support programme, as this was seen as being fundamental to its growth and expansion plans. This was particularly important to Proximity, as political and economic reforms are increasing the presence of imports and it’s important for the social enterprise to drive strong sales amidst growing competition. Additionally, Proximity will be launching a solar powered irrigation pump later in 2015, and is keen for it not to displace its range of treadle pumps already on the market.

As of January 2015, Proximity Designs has provided over 370,000 products and services, benefitting over 475,000 people. It employs 415 people, and its distribution reaches nearly 80% of Rural Myanmar.

Proximity continues to adapt to the needs of this rapidly changing country. As well as developing innovative low-cost solar water pumping systems, it’s currently expanding its range of financial inclusion products as well as access to it farm extension services. Product wise, Proximity is looking to cooperation among different business units to further the social enterprise mode. These new products will allow it to extend further into rural Myanmar, making life easier for more of Myanmar’s farmers and smallholders.

Find out more at http://www.ashden.org/winners/Proximity14