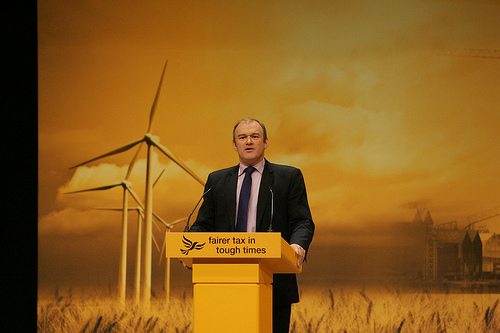 Energy secretary Ed Davey has said that the extraction of shale gas does not clash with UK climate targets, adding that it should be cautiously used as transition fuel.

Speaking at the Royal Society on Monday, Davey said that gas is “part of the answer to climate change” if the country wants to move towards a fossil-free future. Last week, he said that fracking was not “the evil thing that some people try to make it out to be”.

In his latest address, he said, “We have to face it: North Sea gas production is falling and we are become increasingly reliant on gas imports. So UK shale gas could increase our energy security by cutting those imports.

“Home-grown gas, just like home-grown renewables and new nuclear, also provides jobs for our people and tax revenues for our society.”

Davey added that strict regulation should ensure that the environment and communities are protected and stated that clean technologies should still be a priority.

Referring to a report commissioned by the Department of Energy and Climate Change, which claims that fracking is not in contrast with the UK’s climate targets, the energy secretary said, “It should help reassure environmentalists like myself, that we can safely pursue UK shale gas production and meet our national emissions reductions targets designed to help tackle climate change.”

However, he made clear that shale gas production should not compromise the promotion of renewables, nuclear and other low-carbon technologies.

“UK shale gas production must not be at the expense of our wider environmental aims – indeed, if done properly, it will support them. I am determined to make that happen”, he said.

“Mr Davey is endorsing the use of a fuel that remains highly polluting, damages our countryside and scientists say must be largely left underground.”

She added, “The solution to our energy problems is still a roll-out of high-tech low carbon renewables which would be incentivised by supporting the clean energy target in the Energy Bill, but Davey is currently blocking it.”

Meanwhile, Nick Molho, head of climate and energy policy at WWF, said, “The key point is that, as Ed Davey says, gas must be a bridge fuel to a clean energy future, not a destination in itself. The government must wholeheartedly back clean renewable energy and energy efficiency as the long-term means to both the UK’s energy security and tackling climate change.”