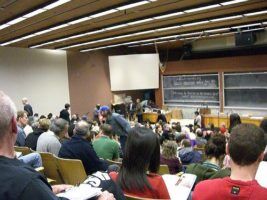 A project from two master’s students on KIC InnoEnergy’s MSc SELECT programme received the highest number of votes in Energy Supply 2016 category to advance to the final of the MIT Climate CoLab Grand Challenge.

The Collective Power Platform, created by Michiel Roelofs and Nikodem Bienia, is a local peer-to-peer energy trading market for prosumers (electricity customers who not only use but also produce energy themselves).

Votes for the project from the Climate CoLab community – which boasts some 75,000 members – far exceeded the competition during the initial rounds of the contest, leading to it winning the Popular Choice Award for the energy supply category. As a result, the pair are automatically entered into the final stage of the competition taking place at the MIT Climate CoLab Crowds & Climate conference (28th – 29th September) in Boston, USA. They will join winners from other categories on the MIT campus to present their work and compete for a grand prize of USD 10,000.

“The knowledge and inspiration we gained during the first year of our KIC InnoEnergy MSc SELECT course was a major contributing factor to bringing the idea ‘to life’. The Master’s programme encourages us to think more broadly about future energy systems and global responsibility. As a result, the initial idea of The Collective Power Platform was born and we began to work on the project during our course where we gained unique insights into future energy markets and systems.”

Michiel Roelofs : The mentoring and support we then received from our teachers is what inspired us to take part in Climate CoLab and we couldn’t be more excited to be going to the final.

The platform creates a virtual utility or power collective where people can trade energy produced in the same local area or city. Any power demand that is not covered by local production can then be bought from the energy wholesale markets by the platform, which represents the power collective in such transactions.

The concept also results in a positive effect on CO2 levels by, for instance, encouraging members of the power collective to become prosumers by investing in small-scale renewable technology.

“We wanted to create something that empowered local electricity consumers and producers to make informed choices about the energy they use. We think that a grid can only be considered to be truly smart if the people within it are enabled to make smart decisions. We’re thrilled that we’ve now got the chance to take our idea to the next level and compete at such a prestigious event.”

“The whole idea behind our Master’s school is to make the links between the academic and the commercial, to encourage students to think about the market applications for the engineering concepts they’re working on. Michiel and Nikodem have created something that could really make a difference in terms of managing local grids and empowering consumers. The fact that they’re now on their way to Boston shows that their concept has real merit on the international stage. We’ll all be cheering them on in September and I wish them every success.”