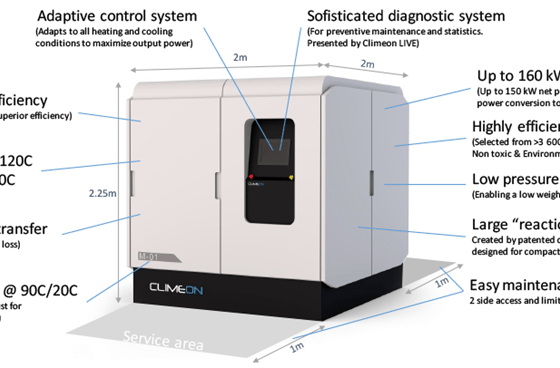 Swedish Climeon and Dutch IF Technology are set out to change the way we produce electricity, literally from the ground up. Climeon’s game changing technology uses hot water from the ground to produce a constant flow of 100% clean electricity without the need for fuel or specific weather conditions. A significant step forwards in realizing the intentions of the Paris COP21 agreement.

Climeon and IF Technology have teamed up to do something that has never been done before in the Netherlands: generate electricity from geothermal energy. The partnership combines Climeon’s revolutionary heat power solution Climeon Ocean™ with IF Technology’s 25 years of experience in designing geothermal systems.

Climeon’s Ocean™ is a vacuum enabled Heat Power solution that generates electricity from hot water far more efficiently than any other solutions in the market. As a consequence, Climeon Ocean™ can operate in ultra-low temperature ranges (70-120°C), making geothermal electricity production in the Netherlands economically feasible.

Climeon and IF Technology have signed an agreement showcasing our belief in the combination of the Ocean™ technology and the Dutch geothermal energy market.

The partnership combines Climeon’s world leading technology with the extensive experience of the Dutch partner IF Technology.

“With more than 25 years of experience working with geothermal projects, IF Technology is our perfect partner” says Climeon CEO Thomas Öström. “In addition to this, the Netherlands with its strong governmental backing for clean energy projects, is perfect for expanding our market.”

Geothermal energy is a 100% renewable resource that does not emit any greenhouse gases and has no visible impact on the landscape. Not surprisingly it is one of the fastest growing renewable resources in the Netherlands. Traditionally geothermal energy has only been used to provide heat to greenhouses, industrial processes and homes. This partnership enables 100% clean electricity without the need for fuel or specific weather conditions. A significant step forwards in realizing the intentions of the Paris COP21 agreement.

The partnership, that was formalized January 2016 is off to a flying start. The companies are already working with several customers to integrate this solution in their geothermal projects. Early calculations show that electricity generation improves both the business case as well as the sustainability of most evaluated geothermal projects. First projects are expected to be announced during 2016.