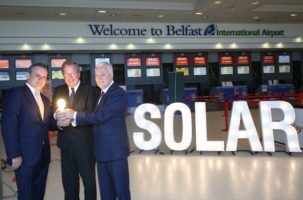 The Environment and Innovation prize was won last night by Lightsource Renewable Energy at the Sustainable Ireland Awards in Belfast.

Lightsource won the award for developing Ireland’s first full scale commercial, ground based, solar farm at Crookedstone in County Antrim. The project was developed in partnership with Belfast International Airport. Crookedstone Solar Farm was completed earlier this year at a cost of £5m

The 4.83 Megawatts peak (MWp) solar farm, at Crookedstone Road, in Antrim, Northern Ireland, was fully funded by Lightsource and connected directly by private wire into Belfast International Airport. The solar farm is about a third of a mile from the terminal building. Crookedstone Solar Farm is the largest solar energy connection to an Airport in the UK or Ireland. Belfast Airport is now getting over a quarter of its power from solar energy and reducing energy costs. Belfast Airport’s annual energy bill is approximately £1.5m. Since the farm became operational, monthly savings of as much as 23% on energy costs have already been achieved. In the process the solar farm will help reduce Belfast’s emissions by 2,100 tonnes of carbon per year. That is the equivalent of taking 469 cars off the road.

Nick Boyle, CEO at Lightsource, said: “We are delighted to win this award for our first project on the island of Ireland. We are particularly happy for Belfast International airport, with whom we have partnered to develop Crookedstone Solar Farm. The team at Belfast have been truly innovative in their approach to adopting solar technology. I am glad that they are already seeing the benefits of a new world of electricity supply, where energy intensive businesses, such as Belfast Airport, can fix electricity pricing for the long-term.”