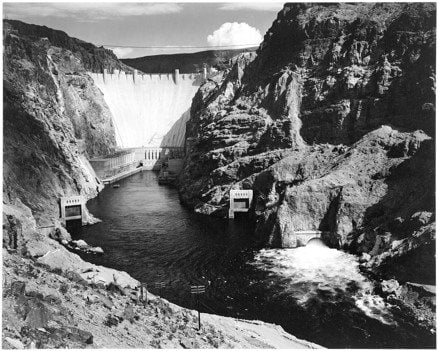 The Hoover dam was built between 1931 and 1936 and dedicated on September 30 1935, by President Franklin D. Roosevelt. Controversially named after President Herbert Hoover (Boulder Dam was the project’s name) the construction cost 112 lives and involved thousands of workers.

The dam creates 247 sq. mile Lake Mead and generates 4.2 TWh per annum from 19 turbines. In comparison, Three Gorges Dam (2008) in China, the largest in the world, generates 98.8 TWh. Hoover Dam remains the sixth largest hydroelectric power station in the US.

Initially a source of irrigation for the developing Southwest United States, the Colorado River was investigated as a hydroelectric dam between 1902 and 1922. By 1926 President Coolidge had signed a bill authorising the building of the dam. The construction took six years, 80 years ago today it was dedicated and it started producing electricity in 1936. It cost $49 million ($833 million with inflation) to build. It is 221m high, 379m long and 14m wide at the crest, 200m at the base.

The construction prevented water from reaching the mouth of the Colorado River for six years turning the freshwater-saltwater delta into an inverse estuary with high saline levels. While the dam prevented natural flooding it also endangered many species that had adapted to flooding. That said, once a hydroelectric complex is constructed, the project produces no direct waste, and has a considerably lower output level of the greenhouse gas carbon dioxide (CO2) than fossil fuel powered energy plants.

The world’s first hydroelectric power scheme was developed at Cragside in Northumberland by William George Armstrong in 1878 and was used to power a single arc lamp in his art gallery. Hydroelectricity generated 1.8% of global energy in 1973 and 2.4% in 2012. It has the advantage of being able to deal with periods of peak demand as it can be turned on and off easily, relatively speaking.