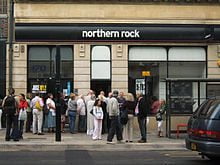 On this day in 2007 the Northern Rock bank received a liquidity support facility from the Bank of England, sparking a bank run, the United Kingdom’s first in 150 years.

Under the chairmanship of Matt Ridley, Northern Rock had a business plan which involved borrowing heavily in the UK and international money markets, extending mortgages to customers based on this funding, and then re-selling these mortgages on international capital markets, a process known as securitisation.

In August 2007, when the global demand from investors for securitised mortgages was falling away, the lack of money raised by this means that Northern Rock became unable to repay loans from the money market. This problem had been anticipated by the financial markets, which drew greater attention to it.

On 14 September 2007, the bank sought and received a liquidity support facility from the Bank of England, to replace funds it was unable to raise from the money market. This led to panic among individual depositors, who feared that their savings might not be available should Northern Rock go into receivership. The result was a bank run – the UK’s first in 150 years – where depositors lined up outside the bank to withdraw all of their savings as quickly as possible, particularly since everyone else was doing the same.