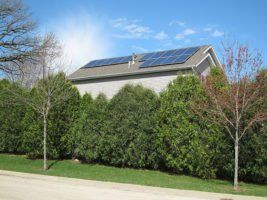 Period Of Change Ahead For Solar Industry

The Brexit vote is suspected to have impacted the UK’s renewable energy sector – changing everything from national renewables targets to the import of solar modules. Likewise, at the start of the year,  the government’s subsidy cuts directly impacted the industry’s record breaking growth.

The Solar Trade Association (STA) is still collecting statistics on job loses, and the majority of solar companies are evaluating their business models to understand what’s next.

However, it’s not all doom and gloom. Recently Solar Power Europe has published its Global Market Outlook, which showed the EU solar market grew by 15 per cent from 2015 to 2016. As an industry we’ve also achieved some record breaking firsts in the last few months. For example, for the first time, the sun provided more UK electricity (via photovoltaic panels) than coal-fired plants over a full 24-hour period on the 9th of April. This was equal to just under 30 gigawatt hours – or 4 per cent of national demand – being met by solar.

Continuing to drive solar and renewables initiatives across the commercial and private sectors is a no brainer. It’s taking place at an amazing rate around the world, particularly in developing countries like India and Argentina. But manufacturers still have a huge responsibility to increase the uptake of solar through cost effective, efficient design, and most importantly, continued innovation, even under the current intense financial strains.

So where is the next innovation? It’s behind you. No really. Able to deliver robustness and efficiency, whilst keeping cost consistent and increasing performance, it’s BiFacial technology. BiFacial technology uniquely utilises both sides of the panel to absorb more light and ultimately generate more electricity. Yes, it’s a double-sided solar panel that maximises the sun’s energy.

When looking at panel design, the majority solar panels are flat, with photovoltaic cells on one side. Which makes sense for rooftops installations and the like. But does it? Research has found that by raising the panel we can make use of our reflective surfaces for better energy yields. And you’d be surprised at what counts as a reflective surface; grass, tiles, paint, snow even sand can bounce sunlight back to the module for increased efficiency. The design utilises the whole panel, back and front to get the most out of conditions.

Over the last few years, demands on the solar market have never been higher. Installers are expecting the same level of output, whilst grants are taken away and budgets are subsequently slashed. The only way a true solar and renewable revolution can be delivered, is through constant progression and innovation. However, as manufacturers continue to innovate with new ideas, they cannot forget about the value of durability and consistent performance. The industry, and in particular the manufacturers, have a responsibility to tap into every single opportunity, for the huge potential of solar to be fulfilled.