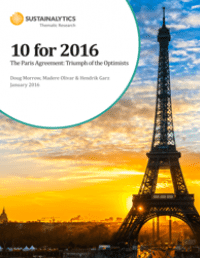 Sustainalytics’ is planning to publish its new thematic research report, 10 for 2016 – The Paris Agreement: Triumph of the Optimists. In short, the report offers a top-down assessment of the COP21 Summit agreement and a bottom-up analysis of ten companies we believe are getting ahead of the climate change curve.

The report finds that the COP21 agreement and country emission reduction initiatives will serve as a positive economic signal for low carbon technologies, including renewable generation, energy efficiency applications and energy storage.

The Report also anticipates greater interaction between investors and governments, partly due to the shifting responsibilities of a universal owner and the growing recognition of climate change as a systemic risk. Covering seven countries and nine industries.

The 10 for 2016 showcases diverse approaches to addressing climate change, from disruptors like Tesla on energy storage to Borregaard on petrochemical alternatives to Cisco on the Internet of Things.

Below is the full list of the 10 companies in 2016 that are worth watching.