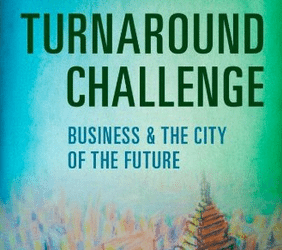 Turnaround Challenge: Business and the City of the Future, by Michael Blowfield and Leo Johnson, is Blue & Green Tomorrow’s 2013 sustainability book of the year.

Released in September, the book takes the reader on a journey through the social and environmental challenges business and individuals face, to some of the potential solutions. It finishes by depicting three possible cities of the future: Petropolis, Cyburbia and a third, smart city that puts people first.

The authors bring with them years of sustainability experience – Blowfield as an academic at the University of Oxford’s Smith School of Enterprise and the Environment, and Johnson as co-founder of consultancy firm Sustainable Finance, which is now part of the PwC group.

The pair map out how business has changed, and how the likes of Henry Ford’s mass production model led to mass consumption, which given the social and environmental threats we face now, is unsustainable and uneconomic in the long-term. They conclude that a transition, or a turnaround, is needed, but that society has the right to be optimistic at how this will play out.

In an interview with Blue & Green Tomorrow in June, Johnson described the book as “a tome that started in a really dark place, with all the carbon and population challenges, and ended up, weirdly, as a tidal wave of optimism.”

Meanwhile, David Rowan, editor of WIRED magazine, said it was a “fast-paced, hope-filled, yet deeply grounded tour of the innovations and technologies with the potential to resolve our era’s greatest environmental, social and economic challenges, where unrestrained business alone has clearly failed.”

A full review of Turnaround Challenge, as well as the two titles that have been highly commended, will be appearing on Blue & Green Tomorrow in the new year.

Highly commended: The Energy of Nations: Risk Blindness and the Road to Renaissance by Jeremy Leggett; and The Heretic’s Guide to Global Finance: Hacking the Future of Money by Brett Scott