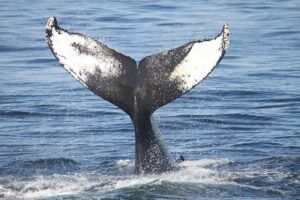 Despite the moratorium put in place in 1986, for profit and ‘bogus science’, Iceland, Japan and Norway have put more than 40,000 whales to death.

Ahead of the 66th meeting of the International Whaling Commission which begins next week in Slovenia, Humane Society International celebrates that more than one hundred thousand whales are estimated to have been spared in the three full decades since the international moratorium on commercial whaling, which came into force in 1986. However, as the IWC celebrates its 70th anniversary, willful disregard of the ban by Japan, Iceland and Norway has sentenced some 40,000 whales to death since it took effect. HSI calls for IWC member nations to robustly condemn these archaic, cruel and unnecessary killings.

HSI Vice President Kitty Block said: “The moratorium is one of the major conservation successes of our time, having prevented the slaughter of tens or even hundreds of thousands of whales since it came into force thirty years ago. And yet it is systematically undermined by persistent commercial whaling by Japan, Iceland and Norway. Japan’s unilateral resumption of its so-called ‘scientific’ hunt in the Southern Ocean last year is a slap in the face not just for the International Whaling Commission but also for the rule of law, as the International Court of Justice clearly ruled Japan’s previous Antarctic ‘research’ programme to be illegal. Loopholes also continue to be exploited by Iceland and Norway in order to kill whales for profit. The IWC is 70 this year and it – and the world – has largely moved on from killing whales for profit. Most of the IWC’s work is now quite rightly about the protection of whales; it’s long overdue for these three countries to join the rest of the international community in protecting and conserving these majestic animals.”

Humane Society International’s expert delegation will be attending the meeting in Slovenia and is able to provide regular updates and commentary. Top priorities include:

• Urging whale-friendly member nations to press for stronger protection for whales, and firmly opposing strategies to undermine the commercial whaling moratorium, such as continuing calls to establish a new category of commercial whaling known as ‘small type coastal whaling’;
• Urging IWC Commissioners to strongly criticize Japan for its continued ‘scientific’ whaling, in light of the International Court of Justice’s March 2014 judgment that Japan’s previous Antarctic whaling did not qualify as scientific research;
• Encouraging strong support to reach the three-quarter voting majority needed to create a South Atlantic Whale Sanctuary;
• Asking member nations to support a Resolution on Cetaceans and Ecosystem services, which notes the increasing research that shows that far from eating all the fish, as Japan and other countries have claimed, whales actually enhance ecosystem productivity as well as helping to regulate carbon dioxide in the atmosphere;
• Encouraging IWC members to establish a new work stream to address the causes of bycatch (the incidental capture of animals in fishing equipment, which kills an estimated 300,000 whales, dolphins and porpoises annually);
• Encouraging IWC members to establish and fund a global network of experts trained to rescue stranded whales, dolphins and porpoises, plus collate data to better inform our understanding of these tragic events;
• Supporting the IWC to progress its Animal Welfare Action Plan, agreed in 2014, that seeks to assess threats from ship strikes, noise pollution, and poorly managed whale watching, amongst others, and provide management advice to tackle these problems.

HSI has the following experts available to comment on the proceedings in Slovenia.

• Kitty Block, J.D., HSI vice president is the head of HSI’s delegation to the IWC. An expert on legal issues involving the treaty and its implementation, she has been participating in IWC meetings since the late 1990s. Mobile: 011-240-888-4424 Email: kblock@hsi.org
• Mark Peter Simmonds, OBE is HSI’s senior marine scientist. An environmental scientist and marine biologist, he has served for 20 years on the IWC Scientific Committee. His main field of scientific endeavor concerns investigating and addressing human threats to marine mammals. He has published widely in the scientific literature on issues including chemical and noise pollution, climate change and whale and dolphin biology and also authored/edited several books.
• Claire Bass is Executive Director of HSI/United Kingdom. She has attended IWC meetings for more than ten years, including as part of the UK’s delegation, and specializes in the welfare concerns around whaling and other human threats in the oceans. Mobile +44 (0)7709 326008 Emailcbass@hsi.org
• Bernard Unti, Ph.D., is Senior Policy Advisor and Special Assistant to the President & CEO of The Humane Society of the United States and Humane Society International. He works on a wide range of strategic, policy, program, and communications priorities, including the protection of whales and other marine mammals. An historian by training, his areas of academic expertise include the evolution of human attitudes toward animals, the history and sociology of the animal protection movement, the development of the kindness-to-animals ethic, the humane education of children, and the relationship between human behaviour change and animal welfare. He first attended at an IWC meeting at Anchorage, Alaska in 2007. Mobile is 011 301-980-6882 Email: bunti@hsi.org