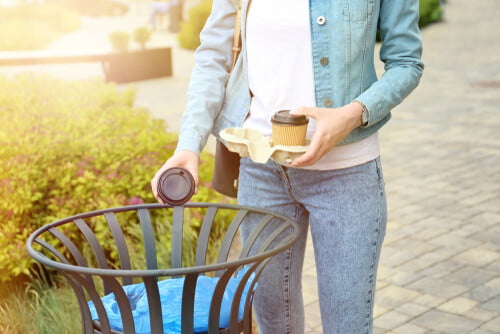 Can people do their jobs without this warm and slightly bitter brew? Most people would find it difficult as they already consider coffee as the ultimate perk-me-up drink. Coffee is also a great equalizer since almost everyone needs a cup of joe first thing in the morning. The sun doesn’t set where coffee is concerned—all across the world, people consume this delicious beverage.

Coffee pods, also known as coffee capsules, are small 2×2-inch cups that hold a small amount of ground coffee. It keeps the coffee’s aroma and taste with an aluminum lid. People drink one cup and throw it away after use.

That being said, the amount of coffee people drink equates with the staggering number of coffee pods or K cups being used. It’s been said that trashed K cups can circle the globe 10 times.

K cups are indeed one of the most common garbage in landfills. If billions of people drink coffee, the K cups found in landfills can attest to people’s massive neglect for the environment.

Coffee Pods and the Problem of Recyclability

The use of K cups has gained momentum since 2006, though coffee pods are single-use plastic, making them highly unnecessary. Coffee retail giants such as Starbucks serve coffee pods for people who are in an extreme rush for a filling perk-me-upper. Keurig—who invented the cups—has designed its coffee machines for a single coffee pod that can be prepared first thing in the morning, handy enough to be taken anywhere.

For the modern coffee drinker, the use of coffee pods will likely not stop in the near future. People know its garbage for the planet, yet they continue to use them as much as they rely on coffee, its convenience, and the many flavors and choices out there.

Keurig has expressed their regret over inventing these cups and are trying to engineer newer alternatives by making K cups reusable and compostable.

However, the problem with the plastic K cup these days is the fact that it’s very hard to recycle. You need a municipality with a specialized recycling plant to be able to fully recycle the K cup plastic.

That said, are biodegradable K cups the solution to the coffee landfill crisis? Can biodegradable K cups save the day without sacrificing taste and quality of coffee and keep the world turning? As the future is looking forward to people being more environmentally conscious and responsible, here are some things that we need to consider:

1. The Possibility of Recyclable K Cups

Keurig has promised that all of its cups will be recyclable by this year. However, although this is positive news, there’s no guarantee that the cups will be 100 percent recycled.

For one thing, the material of a K cup comes from different sources. The lid is made of aluminum, the body is made of some type of plastic, while the coffee granules inside are made entirely of compostable material that’s nitrogen-rich and can be sent back to nature.

Also, it’s still not guaranteed that your municipality will have an available recycling plant that can completely process these cups and make them 100 percent recycled. Some areas won’t have these facilities, and there’s still a chance that these recyclable K cups can still end up in landfills. But with that said however, K cups that are recyclable is a push in the right direction as the more people are educated about recycling, the less K cups will end up in landfills, which is a great thing.

There are some products out there that are said to be biodegradable and compostable. This is a step up from being merely recyclable which is a great move in the right direction.

Products such as One Cup Pods and PurPod100 have cropped up and are fully compostable in San Francisco’s commercial composting facilities. However, as mentioned above, composting is only possible if these facilities are available in your area.

Composting sites are available in San Francisco, but may not be available elsewhere. It’s also quite tough to compost these materials even within a composting facility, and it really needs a focused effort to have them fully composted and fully biodegraded, ending the life cycle of single-use K cups. While there’s still a long way to go in this area, it’s definitely on the right path towards a more sustainable world while minimizing the effects on landfills for future generations.

You don’t have to use a K cup to get your best-brewed coffee. You can get out of the Keurig system entirely and enjoy coffee that doesn’t need the use of K cups, which can harm the planet.

You can prepare an environmentally-friendly serving of coffee through the following:

These types of machines only brew single-serve coffee. This way, you have the exact amount and flavor each morning without wasting a single granule. You can brew directly into your mug and have a flavorful taste of any kind of ordinary or gourmet coffee you fancy.

There are also machines that make coffee on demand, up to 12 cups at a time, so you’ll always have freshly brewed coffee wherever you want it.

French Press Coffee is a traditional but delicious way of making coffee. This requires more than the press of a button, though. But if you’re willing to put in the extra effort, you can rely on it to make you fresh and delicious coffee.

Simply use hot water and coffee, and wait several minutes. Press down the plunger and out comes oozing hot or warm coffee.

There are many versions of the French Press. Some are even travel-sized, which allows you to make coffee directly in a single mug.

Reusable filters are a fine way to switch from K cups. Keurig has its own reusable filter list, which can be used in its coffee machines.

There are also other coffee machine brands that use reusable coffee filters. This is a great way of curbing your dependence on a K cup.

It’s time to make a concerted effort not to buy plastic automatically off the shelf. Make the switch to biodegradable and compostable K cups, and do your part in saving the planet.

Your municipality or local government should also do their part in making an effort to have effective recycling and composting plants in your area, so the potential for the compostability and recyclability of K cups can be fully realized.