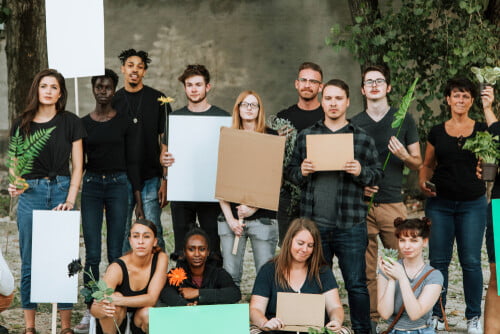 Are Environmental Activists At Risk Of Being Put On Watchlists?

Since the 1960s, environmental activists have been treated with hostility and suspicion. Even people who have aligned themselves with the movement have been reluctant to trust some of the more militant activists among them, even if these activists never engaged in any violent or criminal activity.

The FBI once classified eco-terrorism as the greatest criminal threat in the country. Since the beginning of the century, most people have started to feel that this claim was based on hyperbole and misinformation. Acts of “eco-terrorists” are actually very rare and have become increasingly less prevalent.

That hasn’t stopped passionate environmentalists from being oppressed, though. In 2007, one famous ecoterrorist suspect was convicted based solely on the shaky testimony of one FBI informant. It took nearly 10 years for his conviction to be overturned after allegations surfaced that the FBI had withheld evidence that could have helped the defense build their case.

Unfortunately, the current political climate has heightened fears of eco-terrorism. A little over a year ago, Foreign Policy predicted that ecoterrorism would be the next major wave of terrorism.

Sadly, some anecdotes may help bolster this propaganda. Cuban authorities released a suspected ecoterrorist to the FBI back in August. Concerns are mounting that cases like this will lead authorities to speculate that there is a new wave of eco-terrorists rising in the United States.

What can peaceful environmentalists do to keep themselves from appearing on a watchlist?

Every environmentalist should be proud to be on the right side of history. At the same time, it is important to be pragmatic. The fact that you recognize the validity of your cause does not mean that it will be perceived the right way by outsiders. You need to take reasonable precautions to keep yourself safe from even the most ridiculous types of witch hunts.

Keep in mind that you don’t have to break the law and be prosecuted for authorities to ruin your life if they think you are a potential eco-terrorist. The Department of Homeland Security and other law enforcement agencies have virtually unlimited discretion when it comes to putting people on watchlists. You can be put on the “no fly” list for even the vaguest reasons, even if you have never been convicted of a crime. It is hard to know how many different watchlist groups like DHS have or how they are used, but you definitely don’t want to end up on one.

The good news is that there are a number of reasonable steps that you can take to avoid this fate. Here are some tips.

The Internet has created a double-edged sword for activists. It gives him the opportunity to be anonymous. However, the attempt to be anonymous is often seen as desperation of somebody that has something to hide.

If you are going to try to be anonymous as an online activist, you need to be especially careful. There are a couple of things you can do:

There are a number of things that you can do to hide your real identity online. If you are consistent and careful, you should be able to stay off the grid while still advocating for better environmental protections.

Work closely with legitimate lobbying groups and write your congressman

Environmentalists that work on the fringes are most likely to be targeted for watchlists. You are much less likely to draw suspicion if you are in close contact with well received lobbying groups and our regularly interacting with your local politicians. Law enforcement officials generally think that people that have something to hide will not want to be in plain sight. Also, lobbying groups that donate to politicians that support environmentally friendly lawmakers will have a lot of political capital. Law-enforcement officials don’t want to needlessly go after allies of trusted officials if they want to keep their jobs.

It is good to be passionate about environmentalism. You can even publicly rebuke lawmakers that go against your cause. However, you need to make sure that your messages are delivered in a way that resonates with the general population. You don’t want to say anything that could be misconstrued as a call to violence. Instead, focus on the need for better environmental protections and investing in renewable energy. These are messages that saying environmental activists say every day, so they are highly unlikely to get you in any trouble. Proudly stand up for what you believe in – you’re making a difference every day.