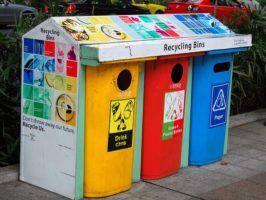 It has been revealed that the best in the country for recycling their waste are farmers. They are so good, in fact, that the government should pay them to show the rest of us how it’s done.

That’s the finding of a British waste and recycling company which surveyed various sectors across the UK economy to see which group produced the highest percentage of recyclable waste compared to waste sent to landfill or incineration.

York-based BusinessWaste.co.uk found that sectors such as factories and farms, whose profits depend on reusing and recycling as much as possible came out on top, while office workers came bottom.

“Office workers generally aren’t aware of the cost implications of throwing everything into their desk-side bin,” says BusinessWaste.co.uk spokesperson Mark Hall, “And in a large organisation that can soon add up to literally tonnes of rubbish.”

BusinessWaste.co.uk looked a tallies from its own operators to find out which areas of the UK economy recycled the best and found the below.

“Why are farmers go good at recycling?” Hall asks. “The answer is simple – they’ve been doing it for centuries, and they have a waste-not-want-not ethic that has survived down the years.

“From small family-run farms to giant agri-businesses, it’s the same – everything is collected, assessed and re-used where possible.

“Only the absolute detritus is thrown away, and then only with reluctance,” says the BusinessWaste.co.uk spokesperson.

BusinessWaste.co.uk say factory owners and operators have the same sort of ethic, but for entirely different reasons.

“Every tonne of unrecyclable waste they produce costs them money to get rid of,” says Hall. “Industry has gone to great lengths to find alternative uses for its waste, often selling it on to another sector that finds it useful for their own products.”

Waste rubber and glass going on to be constituent ingredients of low-noise road surfaces is a fantastic example of this cooperation between industrial sectors, BusinessWaste.co.uk says.

Offices, on the other hand, have little incentive to boost their recycling waste, and many simply can’t be bothered – or simply don’t have the time in a pressured environment – to move from their desks to find the bin for their empty drink can.

And that’s why farmers should be employed by the Department of the Environment (DEFRA) as recycling ‘champions’ to pass on their knowledge to the slackers and refuseniks at the bottom of the survey.

“They’ve got generations of knowledge that could and should be passed on to others,” says Hall, “And because it results in everybody saving money and resources, it’s a scheme that will easily pay for itself in the long run.

“And the sight of a farmer telling a nightclub owner how to improve their business margins is something I dearly want to see.”