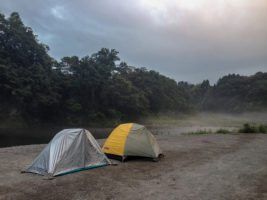 Mix one part necessity and one part ingenuity and the human brain can solve just about anything—or at the very least, make something that already exists even better.

Most of us would never think that the process by which we heat water can be improved upon and yet the technology responsible for doing just that is improving all the time (just take a look at the efficiencies afforded by the tankless water heater).

When it comes to the great outdoors and spending time within it with family and friends, creating the type of gadgets that will make the experience as comfortable as possible is big business—a statement that is indelibly supported by the proliferation of specialty stores that offer all the intelligently designed and diminutively built camping accessories that you’ll ever need. Accessories that are just as vital as large camping tents when journeying.

And while you may be forced to shell out your hard-earned money on things like a compass or portable water filtration system (though to be fair, both of these items can be readily made in the wild by a knowledgeable outdoors person), you just might have it within yourself to build your very own portable water heater—meaning you’ll never need to go without a muscle soothing shower after an arduous hike ever again.

First Thing’s First—What Can You Buy?

For those who are roughing it, a solar shower bag is a relatively inexpensive way to heat water so that taking an outdoor shower does not become synonymous with some sort of inhumane cold-water torture.

How it works: A dark coloured bag (usually black so that it absorbs the greatest amount of solar energy) is fitted with a hose and nozzle. The sun heats the water, and gravity does the rest. On the whole, this product is easy to store and is lightweight (two things that go hand in hand with camping), but there are some drawbacks. The first, and it’s not much of one, is that it must be hung from a tree otherwise the user must hold the bag up while showering (making it very difficult to lather and rinse). The second issue is that it relies exclusively on the sun to heat the water—on cloudy days or if camping in thick bush, it will be near impossible to heat the water. No sun, no warm shower.

What You Can Build Yourself

The solar powered shower bag is a nifty idea, to be sure—but what if you could make something yourself that could not only use the sun’s solar energy to passively heat water, it could also be placed on a fire to heat water quickly? Surprisingly, you can—and while the solution may not offer the compatible qualities of a solar shower bag, it is much more versatile than a typical store bought portable water heater.

To create your own DIY portable water heater, you’ll need the following:

– Weed sprayer (made of metal, and NEW—don’t repurpose a used weed sprayer no matter how vigorously it’s been cleaned)
– 1/4” x 1/2” MPT fitting
– Proper shower hose
– Shower wand
– Trickle valve (to turn the water on and off)
– Low flow shower head (used to maximize the water supply)

Step 1: The tank. Again, it’s highly recommended that you purchase a new tank and one that is made of metal. If you can find one painted black, great; otherwise purchase a can of spray paint and paint it black so that it will absorb more of the sun’s solar energy.

Step 2: Assembly. Insert the MPT fitting (available at any hardware store) into the hose. This threaded piece will allow you to attach the shower hose. If you plan on heating the tank with a fire, it’s probably better that the shower hose be made of metal. Then:

That’s all there is to it. You now have a portable water heater/shower that you can take with you anywhere, one that can use both the energy from the sun and a fire to heat the water.

Of course, we understand that some people may not want to go through the hassle of building a water heater on their own. The good news is that you can buy a great hybrid water heater that is also eco-friendly. You just have to do your due diligence when making the purchase.

Even if you’d rather not place the tank directly on the fire, you can boil water using a separate receptacle then pour the hot water into the tank. For a nice warm shower, try to observe a 2 to 1 ratio—fill the tank up two thirds of the way with cold water, then add your hot water.