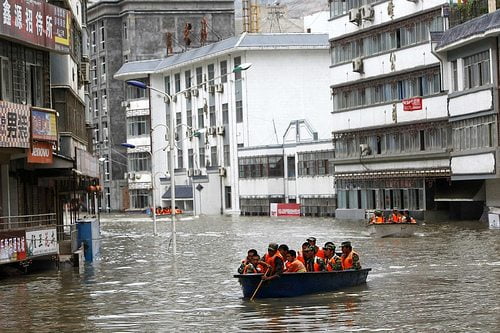 Rainstorms and floods across parts of China have killed 14 people and forced hundreds of thousands to relocate, with the estimated clean-up cost around $250m (£146m) in Hunan province alone.

The eastern province of Jiangxi, and Hunan in central China, have been among the worst regions affected. At least five people have died and more than 120,000 had to leave their homes in Jiangxi. Around 4,000 houses and 63,100 hectares of crops were also affected, for an estimated loss of about $85m (£49m).

In Hunan, floods killed seven people and four others are still missing, with more than 170,000 people forced to relocate. More than 2 million people were affected, with nearly 10,000 homes destroyed and 122,700 hectares of crops damaged. Estimated direct cost of the flood in Hunan has risen to $250m (£146m).

In the south of the country, authorities have issued a 24-hour grade four emergency response – the lowest level in China’s emergency response system – with rescue teams, funds and goods being dispatched to the most affected regions.

Overall, more than 3 million people are believed to have been affected by the floods.

Earlier this year, China found out that the cost of natural disasters such as droughts, floods and earthquakes caused economic losses of around 421 billion yuan (£41 billion) in 2013, with climate change partly to blame.

A recent study has suggested that measures to control the great Yellow river made almost 3,000 years ago and bad land use could be responsible for two devastating floods occurred back in the past, which scientists said should serve as a lesson for the present.