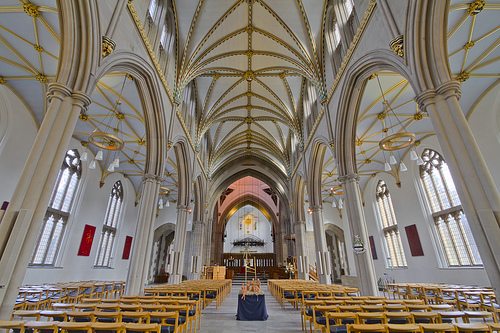 The Church of England has told its followers that shale gas extraction by fracking might risk the future of “God’s glorious creation”.

In a message to Anglicans in Lancashire, where a number of shale gas extraction sites have been proposed, the Diocese of Blackburn said that fracking “is increasingly presenting people with a choice between economic gain and a healthy environment.”

The document seeks to educate churchgoers who are unfamiliar with the debate over the controversial extraction method. It says that people in favour of fracking claim it is a way to address economic necessities, but that it also “causes a range of environmental problems”, pointing to reported drinking water contamination near fracking sites in the US.

The document concludes by urging people to think of future generations, saying, “The time we spend thinking, praying and acting now to protect our drinking water, and the rest of God’s glorious creation cannot compare with the time succeeding generations could potentially spend trying to make good what will likely happen if we in the church remain uninformed and silent.”

Geological surveys have shown that beneath Lancashire and parts of Yorkshire, there may be a significant amount of accessible shale gas, with as much as 1,300 trillion cubic feet of gas estimated to be underground in the north of England overall.

He said that if planning applications for fracking in Northern Ireland were made, it would be for him to decide whether to approve them, not the prime minister. He added, “I am not going to make any decision until all the facts and scientific evidence are established. To do otherwise would be reckless and irresponsible.”

A new opinion poll commissioned by The Guardian and conducted by research consultancy ICM has found that opinions of fracking are currently split.

When asked if fracking should take place in the UK, 44% of respondents said yes, with only 30% saying no and 26% undecided.

But when asked whether people would want fracking near their homes, the number opposed rises to 40%, with those in favour falling slightly to 41%.