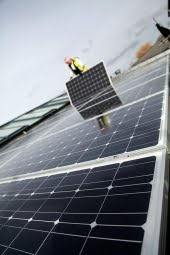 More than 100 hundred churches have installed solar panels through Ecotricity since December, taking advantage of the current court decision over the Government’s decision to cut subsidies.

Before the feed-in tariff rates were slashed by the Government in December, only 47 church buildings in Gloucester, Exeter and Bath and Wells had solar panels.

More than 100 hundred churches have installed solar panels through Ecotricity since December, taking advantage of the current court decision over the Government’s decision to cut subsidies.

Before the feed-in tariff rates were slashed by the Government in December, only 47 church buildings in Gloucester, Exeter and Bath and Wells had solar panels.

However, they took advantage when the Government took precautions and extended the amount of time they would keep the higher rates in case they lost their High Court appeal.

Church of England procurement officer Russell Stables says this is more than a cost saving exercise because it is a way for the church to demonstrate “good stewardship and releasing money which can be directed towards mission and ministry”.

The move to solar power is all part of a national campaign from the Church of England, called Shrinking the Footprint. Parishes throughout the UK are being encouraged to reduce their carbon footprint and make greener choices with the aim of cutting 80% of carbon emissions by 2050.

Canon Adrian Slade, director of social responsibility for the Church of England, explained that they decided to take action because as a church they are “deeply concerned about how climate change is already affecting the poorest in our world, and sure that it will affect us all over the next 50 years”.

Ecotricity founder, Dale Vince, said the Church of England is “setting a great example for others” by looking how to make their whole organisation sustainable.

He added, “The need to protect the environment is unarguable these days and organisations of all shapes, sizes and creeds need to step up and take responsibility.”

Canon Slade explains that there are a number of benefits from the church taking an environmental stance, “It is a very visible sign that these dioceses are taking the message about the environment seriously. Over 100 vicarages, a number of schools and churches have a visible symbol on their roofs that the church is looking to reduce our impact on the environment.

“It is a message to both church members and local people that the church is investing in future generations”.

Ecotricity is making real progress in moving away from fossil fuel use – in 2011, renewable energy was 54% of Ecotricity’s fuel mix. Blue & Green Tomorrow’s preferred renewable energy provider is Good Energy, because they are the only company to supply 100% renewable energy, which means you can go 100% green too.