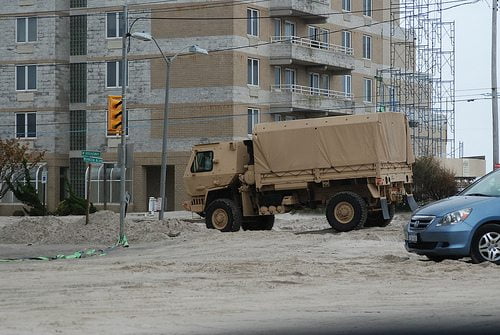 Some of the largest cities in the US and Asia, such as New York, Miami and Mumbai, are among the most at risk of severe coastal flooding driven by climate change, scientists have warned.

In a study published in the journal Nature Climate Change, researchers predict that average global flood losses could rise from around $6 billion (£3.8 billion) per year in 2005 to over $60 billion (£38 billion) per year by 2050. They attribute this rise to population increases and economic growth in coastal cities, as well as sea level rises caused by climate change.

These increases assume that at-risk cities invest in flood defences as expected. If cities do upgrade their defences, projections for a worst-case scenario show that their annual losses could be more than $1 trillion (£650 billion).

“If we did nothing about the risk, the flood damages in coastal cities would grow to huge amounts. So that’s really not an option”, study co-author Robert Nicholls, a coastal engineering professor at the University of Southampton, told LiveScience.

The study investigated projected flood losses for the 136 largest coastal cities in the world. The top three said to be most at risk are Guangzhou in southern China and Mumbai and Kolkata in India. New Orleans, Jakarta, Boston and Bangkok are also in the top 20.

“The bottom line is it shows that flood risk is rising today — it’s happening”, Nicholls said. “All these cities need to be preparing for that.”

In May, a UN report claimed that so far this century, natural disasters such as floods and earthquakes have caused directed losses of around $2.5 trillion (£1.6 trillion). It is estimated that over $100 billion (£66 billion) has been lost in the last three years alone.