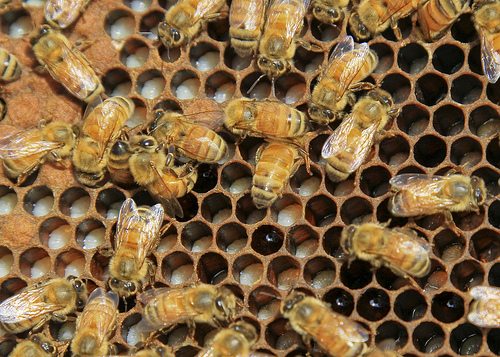 Viruses carried by commercial bees, used for honey or to pollinate crops, risk spreading diseases to wild pollinator populations with potentially “devastating effects”, researchers from the University of Exeter have warned.

The research, funded by the Royal Society and the Natural Environment Research Council, found that commercial species of honey bees and bumble bees can carry fast evolving viruses that have the potential to decimate wild pollinator species, including bees, hoverflies and butterflies. The effects of such an event would also place biodiversity and food security at risk.

Commercial pollinators are typically used to pollinate crops such as tomatoes, sweet peppers and oilseed rape. The global value of insect pollinators has been estimated to be around €153 billion (£117bn) each year and wild pollinators contribute to this and play an important role in pollinating crops and native plants.

However, the study warns that the social behaviour of honeybees, bumblebees and social wasps provide perfect conditions for disease transmission within colonies and between species. The risk of disease transmission can be further increased through poor management of commercial species, intensive breeding, poor pathogen screening, and the release of commercial bees into the environment to interact freely with wild pollinators.

Dr Lena Wilfery, from the Centre for Ecology and Conservation in Biosciences at the University of Exeter, said, “Our study highlights the importance of preventing the release of diseased commercial pollinators into the wild. The diseases carried by commercial species affect a wide range of wild pollinators but their spread can be avoided by improved monitoring and management practices.

Pollinators are already seeing their populations decline rapidly, particularly in recent years. This has been linked to habitat destruction and increase use in pesticides.