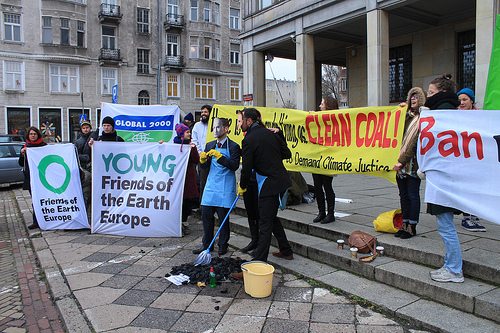 As crucial UN climate talks in Warsaw reach their 10th and penultimate day, hundreds of environmental activists have announced they are walking out of the negotiations in protest at the lack of progress made.

Members of campaign groups including Greenpeace, Oxfam, Friends of the Earth and WWF will leave the discussions in the Polish capital’s national stadium on Thursday.

In a statement, the NGOs and social movements say the decision was partly motivated by the failure of UN delegates to agree on plans to reduce global greenhouse gas emissions to a level that can curb devastating climate change and by the series of controversies that have blighted the talks.

They damningly warn that “the Warsaw Climate Conference, which should have been an important step in the just transition to a sustainable future, is on track to deliver virtually nothing.”

Richard Dixon, director of Friends of the Earth Scotland, said, “The lack of urgency in these talks in Warsaw has been so monumental that we were left with no option but to walk out in protest. Most of the key governments are still a world away from taking serious action to prevent climate catastrophe.

“Against the backdrop of the devastation caused by Super-Typhoon Haiyan, we have seen Australia, Canada and Japan giving up on previous climate commitments and blocking progress on issues of key concern to developing countries

He added, “This conference has been sponsored by fracking companies and airlines, and the Polish government ran a major coal conference at the same time.”

The early hours of the ninth day of the talks also ended with a walkout, as representatives of 133 countries abandoned talks over a mechanism of climate compensation.

Through such a system, rich countries, which have historically contributed the most to climate change, would compensate the poorer countries that are set to suffer the most from its effects. Delegates agreed upon loss and damage at the last COP in Doha, but exactly how it would work has yet to be decided.

A number of NGOs and campaigners have urged governments to agree on a deal to see this concept realised.

However, the countries of the G77 and China walked out of discussions on this subject at 4am on Wednesday morning, after delegates from Australia blocked the talks – and allegedly turned up to the negotiations dressed in shorts and T-shirts.

EU negotiator Paul Watkinson tweeted, “It is one thing to be tired in a negotiation meeting, another to turn up in pyjamas.”

Saleemul Huq of the International Institute for Environment and Development observed, “The negotiations were actually going on reasonably well […] It went on into the night, well into the early morning, discussing things in what I think was a spirit of cooperation.

“But then at the end, the Australian delegation just put brackets around everything. All that negotiation went to waste.”

In other surprising news from the conference, Marcin Korolec, the president of the event, has been sacked from his role as Polish environment minister. He will continue orchestrating affairs from his UN role for the remainder of the talks, but has been replaced by Maciej Grabowski.

Grabowski has already said that the development of environmentally damaging shale gas in Poland is his priority.