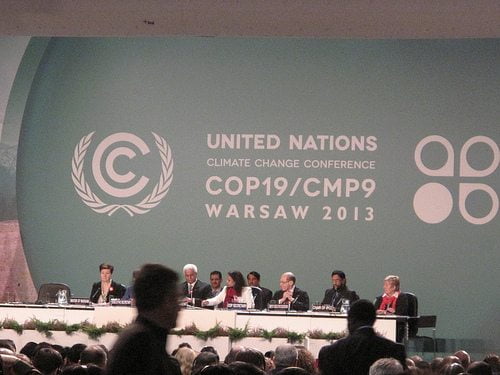 As UN climate talks in Warsaw enter their final week, the leader of China’s delegation has said that he is unsure the negotiations will be able to secure progress.

Su Wei said, “I don’t know how to describe the meetings and negotiations here in Warsaw.” He also criticised the European Union’s targets for reducing greenhouse gas emissions as being “not at all ambitious“.

In particular, Su said it was critical that negotiators set a specific timetable and roadmap to deliver the promises of developed nations, which have historically contributed the most to climate change, to compensate the developing countries which are set to suffer the most from its effects.

He added it was not yet clear whether the richer countries had implemented their plan to give $10 billion to poorer countries annually from 2010 to 2012.

Su went on to say that it was also unknown how these countries would fulfill their promise to provide $100 billion between 2013 and 2020, while they were recovering from the economic downturn.

“We are almost at the end of 2013 and so it is urgent to have actual provisions of resources confirmed and to achieve the finance goal by developed countries by 2020.

“At the core of implementation in Warsaw is finance, and we hope we can make progress on that. That is a very important starting point, and also is key to the successful conclusions of post-2020 climate talks.”

Inspired by the devastation caused to the Philippine’s by Typhoon Haiyan, the issue of compensation has become one of the most prominent subjects being discussed at the two-week talks.

The NGOs WWF, ActionAid and CARE presented a report to delegates in Warsaw last week urging for such a mechanism of loss and damage to be swiftly institutionalised.

Sandeep Chamling Rai, WWF’s senior adviser for adaptation policy, argued, “Those who are the most responsible must take the lead role instead of behaving as if we had decades to act. We don’t have any time to lose.”

Efforts to commit all nations to ambitious greenhouse gas emission reduction targets have also suffered a series of blows, including Japan’s decision to lower its own objectives.

Although no major decisions are on the agenda in Warsaw, in 2011, UN members agreed to conclude a new deal by 2015 that would aim to limit global warming to 2C. Taking effect in 2020, the pact would commit all nations to targets for reducing greenhouse gas emissions.

However, many of the details and mechanisms of this strategy remain undecided, with only 43 days of negotiation left until the agreement must be signed in Paris. Environmentalists have expressed concern that the talks aren’t moving fast enough. On Saturday, around 3,000 people gathered on the streets of Warsaw in a climate justice protest march, protesting the lack of progress.

“After one week, the world governments continue to disappoint their citizens who are fighting against catastrophic climate change and its devastating impacts”, said Martin Kaiser of Greenpeace.

Meanwhile, Samantha Smith, WWF’s head of climate and energy, told RTCC, “We’re super frustrated, we’re hoping this process next week can make some forward movement, but if it doesn’t, we really have to question why are governments here, why are we here, and what is the UNFCCC Secretariat doing about this?”