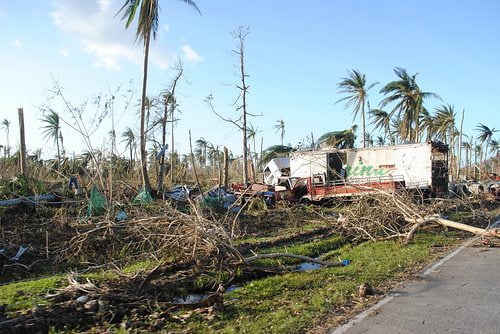 Developing countries have already suffered the most from the effects of climate change, and richer nations are obligated to help, according to a new report released on Tuesday at UN climate talks in Warsaw.

The Global Climate Risk Index 2014, compiled by the thinktank Germanwatch, investigates which countries have been hit the hardest by extreme weather events such as floods, heatwaves and storms between 1993 and 2012.

The report finds that in this time period, Honduras, Myanmar and Haiti were the countries most affected, whereas in last year alone, the Philippines, Haiti and Pakistan experienced the most damaging weather events.

Eight of the 10 countries most affected in this period are developing countries rated as having average low incomes or lower-middle incomes.

The report also warns that while no single weather event can be attributed solely to human-caused climate change, global warming will likely increase the frequency of such events.

One of the subjects that the delegates of 195 countries must discuss at the 19th session of the Conference of the Parties (COP19) to the United Nations Framework Convention on Climate Change (UNFCCC)  – currently taking place in the Polish capital Warsaw – is how to institutionalise a mechanism of “loss and damage.”

Through such a system, rich countries, which have historically contributed the most to climate change, would compensate the poorer countries which are set to suffer the most from its effects. Delegates agreed upon loss and damage at the last COP in Doha, but exactly how it would work has yet to be decided.

The writers of the Global Climate Risk Index urged negotiators to take the opportunity in Warsaw to make commitments upon a mechanism such as this.

Christoph Bals, policy director of Germanwatch, said that the report shows “that the self-help capacity of countries is being overwhelmed by the scale of the climate disasters they are facing.

In the aftermath of Typhoon Haiyan, Naderev Saño, the Philippines’ climate change commissioner and its lead negotiator at Warsaw, opened the conference with an emotional address in which announced that he will not eat for the duration of the two-week event until a meaningful deal had been reached. His pledge was taken out of solidarity for his countrymen and women who are struggling to find food at home.

Over 20 civil society groups attending the summit have reportedly joined Saño’s fast, while other delegates have expressed their frustration.

Muhammad Irfan Tariq, director-general of Pakistan’s climate change division, described how his country was suffering from food shortages and water scarcity after a series of floods and droughts.

“Our people have contributed least to climate change, yet they are enduring great suffering. We have had disastrous floods followed by three years of droughts; we have not the resources to deal with this on our own”, he said.